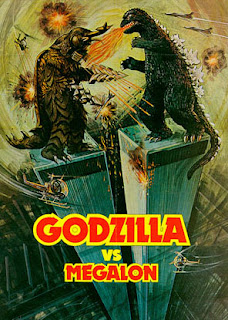 Godzilla vs. Megalon.  To this day, the title sends shivers down my spine.  I got it for Christmas when I was a little kid; from Santa Claus himself according to the tag.  I think, but I'm not sure, that I was in the third grade.  The exact timeline isn't important - what's important is that it was the first Godzilla movie I ever owned.  Now I'd seen scary movies before thanks to my brothers and I'd seen giant monster flicks too, including a lot of Godzilla, but I never actually had one of my own.  I had a few VHS tapes already, He-Man and whatnot, but something about this one was different.  Looking back on it in hindsight I can almost convince myself that it was a formative moment for me, a premonition of the shelves and shelves full of sci-fi and horror flicks that I'd eventually amass as a adult.

At the time, all that mattered to me was that I had a Godzilla movie of my very own, to watch whenever I wanted without subjecting myself to the capricious vicissitudes of any cable station or video store.  It was the Good Times Home Video version, the weirdly orange box art depicting the titular titans locked in battle astride the World Trade Center.  I still have that tape, though I wouldn't dare to try and play it at this point.  It's probably been watched at least 30 times in its entirety, although certain highlights such as the climactic battle have far more wear on them.  To this day there are scenes from the American dub of the film that I can recite by heart.

At this point I'm going to let readers in on a little secret: I like Godzilla.  That comes as a big surprise, I'm sure.  The incessant kaiju references and pictures all over this entire blog couldn't possibly have tipped anyone off.  Actually, I take great joy in wearing my Godzilla-love on my sleeve, as my 2008 post in which I tried to cheekily compare Godzilla with Jesus indicated in a none-too-subtle fashion.  Hell, I like Godzilla so much that I even lobbied the Wife to have him on our wedding cake. 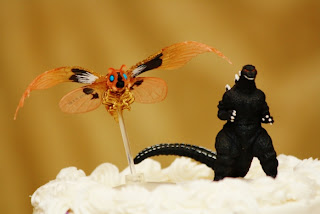 Keeping that in mind, it's not at all easy to objectively review Godzilla vs. Megalon.  It's an utterly ridiculous movie, made all the more so because I'm going to talk exclusively about the American dub of the film which is so near and dear to me.  I won't, -can't-, make any excuses for it.  It's a sloppily written, slapdash creature feature with all the craft and subtle nuance of a sloppy wet fart.

And I love it.

The plot of the movie barely exists: Undersea nuclear weapons testing has angered the people of the creatively named underwater kingdom of Seatopia.1  Peopled entirely by toga-clad, mutton-chopped weirdos, Seatopia doesn't bother sending a representative to the United Nations or even dispatching an army (presumably composed of trident-wielding hoplites riding dolphins) to attack the land dwellers who conducted the tests.  Nope, instead they summon up their angry god Megalon, which is for some reason a 50 meter-tall, lightning-shooting, grenade-spitting beetle with drills for hands2, and send it to smite Japan.

Meanwhile Seatopian secret agents attack the house of  local inventor Goro Ibuki in order to steal Jet Jaguar, the man-sized, suspiciously Ultraman-like recreational robot he's been working on and of which they are inexplicably aware.  Goro and his friends defeat the scoundrels' first attempt using a potent combination of bad 1970s movie karate and weird editing, but eventually the villains make off with the robot and use it a flying beacon (Did I forget to mention that the humanoid robot some dude built in his living room can also fly?) to guide Megalon through the Japanese countryside on a mission of destruction.

Megalon hops around burning trees and fighting tanks while making frequent use of footage from previous Toho films such as Godzilla vs. Gigan.  Eventually Jet Jaguar breaks free of Seatopian control and flies to Monster Island to retrieve Godzilla to help fight Megalon.  As Godzilla slowly swims to Japan, Jet Jaguar flies ahead of him and turns himself into a giant (Did I forget to mention that the flying humanoid robot some dude built in his living room can also turn himself into a giant?) in order to hold off Megalon until the calvary arrives.

As a side note, the prominent role of  the Jet Jaguar character in this film was apparently in response to the then-popular Ultraman series of television shows, in which a human hero fought giant monsters by turning into an vaguely robot-like humanoid giant.3  This was lost on me as a kid, as I didn't actually see the original Ultraman series until my late 20s.  At the time the only similar sci-fi hero with which I was familiar was Spectreman, who, I might add, could switch from human- to giant-sized as well.  In any event, legend has it that Jet Jaguar has so much more screen time than Godzilla in this film because Toho was hoping to spin off a separate franchise just for him.

Jet Jaguar puts a beating on Megalon, and for a while it seems as if Godzilla is going to show up to the party all dressed up and with no one to dance with, but then the Seatopians play their trump card.  Cleverly remembering that Godzilla vs. Gigan had come out just the year before and gambling that the Gigan outfit must still be around somewhere, the Seatopian commander calls the villains from the previous, otherwise unrelated film and asks them to send Gigan to help.  Lazy writing?  Sure, but Gigan's my favorite monster so I'll let it slide just this once. 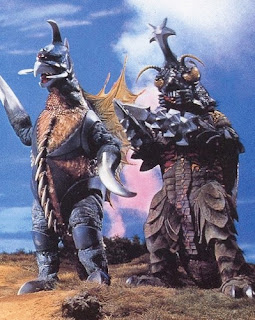 Gigan and Megalon: Hands are for sissies.

Gigan flies from the other side of the freakin' galaxy in about twenty seconds and he and Megalon proceed to literally pound Jet Jaguar into the ground.  This battle also includes what may be the first ever giant monster high-five caught on film.  Just when all hope seems lost, Godzilla finally makes landfall...miles away.  An awkward sequence ensues in which Godzilla is shown sprinting across the sandy, sparsely vegetated savannah that apparently comprised most of the Japanese countryside in the 1970s interspersed with more shots of Jet Jaguar getting a WWF-style beatdown.

When Godzilla finally gets there, one of the best fights in all of the Godzilla series erupts.  Seriously, they fight forever.  As a kid it seemed like the final battle took up half of the movie, and while I'm sure that's not really the case, the too-long wait for Godzilla really does have a decent payoff.  Unfortunately, a substantial chunk of the battle is actually reused footage from Godzilla vs. Gigan, which as I mentioned earlier had only come out the year before.  Still, at that point in my life I hadn't yet seen Godzilla vs. Gigan, so the (reused) scene in which Gigan slashes open Godzilla's shoulder with the rotary saw on his belly, resulting a massive fountain of blood, absolutely blew my young mind.

There's an exceptionally silly sequence in which Megalon traps Godzilla and Jet Jaguar in a ring of flames using the weird napalm grenades he shoots from his mouth.  Nevermind that Godzilla is practically invincible and shoots thermonuclear flames out of his mouth every single day, there's absolutely no way that he could just walk through some burning foliage and kick Megalon in the shins.  Instead there's a taut, dramatic sequence in which Godzilla clings to Jet Jaguar's back like a koala while the robot flies them to safety.

Soon after the tide turns in the heroes' favor.  Gigan decides he's had enough and flies away, leaving Megalon to his fate.  What results is one of the referenced sequences in all of Godzilla, a scene so iconic that it was eventually immortalized in the opening credits to Mystery Science Theater 3000.  Behold, the dropkick of doom:

Now that Megalon has gotten his comeuppance, Godzilla shakes hands with his new robot pal and lumbers off into the sunset.  Then Jet Jaguar shrinks down to normal size, sets the nearest small child on his shoulders, and happily marches away as...as a theme song about him plays.  Godzilla gets the short shrift in his own movie and Jet Jaguar stands smiling into the future, his vacant black eyes fixed on a franchise of his own that never quite materialized.

For years Godzilla vs. Megalon was only available on DVD in the U.S. as a bootleg.  It was one of three Godzilla films (the others being Return of Godzilla, aka Godzilla 1985, and Godzilla vs. Biollante) caught in a bizarre rights limbo that has confounded Godzilla fans and completionists for years.  Last year a company called Media Blasters announced that they would be releasing the film on region 1 DVD, but the project suffered gruesome delays and hang-ups because of problems with Toho, the company that owns the Godzilla franchise.  Originally slated for release in December 2011, Godzilla vs. Megalon finally came out on DVD today.  I haven't even taken delivery of my copy yet - This review was done using a crude rip of the movie on a pair of  VCDs.

Like I said, Godzilla vs. Megalon isn't a good film. Hell, it's barely a Godzilla film: it's a Jet Jaguar movie that had Godzilla added in at the eleventh hour to put butts in seats.  That said, it's a fun movie with satisfyingly over-the-top monster battles and a campy, lighthearted tone.  Even though Jet Jaguar is a boring rip-off of every other Japanese sci-fi hero of the era, Gigan and Megalon are wildly original out-of-this-world designs and are portrayed with a surprising amount of personality.4  Regardless of its numerous and prominent flaws, this movie is a good time.  Plus, because of the rights issues, it's one of the rare Godzilla movies that casual fans may never have seen.  If you're into camp, kaiju movies, or just plain silly cinema, I'd recommend checking this one out.

____________________
1.) Or is just an underground kingdom?  Or maybe under the ocean floor..?
2.) I would worship that.
3.) There were, and continue to be, scads of the Ultraman shows.  The original series aired in the 1960s, but by the time Megalon came out at least three other Ultraman series had aired.  Today there have been more than twenty shows in the Ultra Series.
4.) Gigan, in fact, was portrayed by Kenpachiro Satsuma, who would later go on to play Godzilla in the Heisei series of films in the 80s and 90s.
Posted by Skippy the Skeptic at 11:54 PM