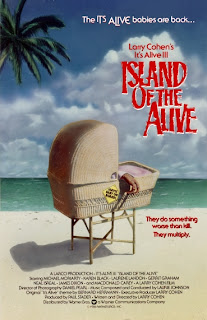 In 1974 Larry Cohen wrote and directed It's Alive, an issue-oriented horror film about a baby transformed into a killer mutant by prescription drugs taken by its mother during pregnancy.  No doubt inspired by the thalidomide incident in the 1950s and 60s, wherein a popular morning sickness drug was found to cause horrific birth defects, the film had a message but not much of an audience.  Despite two theatrical releases, the film never made a huge amount of money, but it did spawn a pair of sequels, It Lives Again in 1978 and It's Alive III: Island of the Alive nine years later.

The sequels expand on premise of the first movie, explaining that the creature from It's Alive was only the first of many mutant births and that the government has instituted a draconian, if somewhat understandable, euthanasia program trying to cull the number of dangerous infants.  Meanwhile, some parents and activists have banded together to try and protect the children by hiding them from the authorities.  It's honestly not a bad set-up and, despite the fact that it's almost certainly a clumsy metaphor for the abortion debate, it fits well into the logic of the films.

It's Alive III begins with an interesting twist on a old movie cliche: a woman giving birth in the back of a taxi cab.  As the cabbie and a passing policeman watch in horror, the woman's child turns out to be one of the mutants and it bloodily claws its way out of her womb. The creature attacks and kills the cop despite absorbing a hail of bullets.  It's a shocking intro that sets up for the rest of the movie's first act: a nationally-televised court case in which the fate of five of the mutant infants is decided.  Ultimately a judge finds that, as babies, the creatures can't be held responsible for their murderous tendencies and holds that instead of being euthanized, they should instead be sent to an uninhabited island forever.1

Soon a party of hunters appears on the island.  They're shills for one of the evil pharmaceutical companies whose drugs are responsible for the mutations.  As an exercise in corporate damage control, they've come to kill the creatures and dispose of the remains so that no further research can ever be conducted on them that might establish any legal liability on the part of the company.  Needless to say, they're instantly slaughtered by the killer babies.  One even appears in a soaring helicopter and somehow bites the pilot so hard that the chopper explodes in a ball of fire!

Four years later Steve Jarvis, the public face of the campaign to save the mutant children, is hired as a consultant to travel to the island with a team of scientists who want to study the development of the kids.2  The researchers also plan to capture or kill one of the creatures in order to bring it back to the mainland for a more detailed study.  After all, one of the researchers explains with a straight face, these deformed, misshapen, fang-jawed, flesh-ripping monsters might be the next leap in human evolution.  Meanwhile Jarvis, whose son is among the creatures on lurking on the island, is clearly beginning to come unhinged. Soon, and predictably, the party begins to be torn apart by the creatures, which are now portrayed by actors in foam rubber suits rather than stop-motion.  In short order the mutant babies have overtaken the researchers' ship and killed or chased away everyone but Jarvis.  Then, bizarrely, they force him to take them back to the mainland.

Jarvis soon discovers that the creatures are reproducing and escapes from the ship by leaping overboard.  Shortly thereafter he washes up in Cuba while the monsters make landfall in the U.S.  The mutants slaughter a few punks under a pier, then immediately begin searching for Jarvis's wife Ellen. In the meantime Jarvis has somehow managed to make it back from Cuba to confront them.  The police kill most of the creatures, but Jarvis' son and its mate eventually hunt down Jarvis and Ellen, handing over their own infant (presumably double-mutant) son to them before being gunned down by the police.  Just before the creatures are killed it's discovered that the entire population of them mutants is dying off from the measles  Presumably the moral is that these misunderstood creatures, which have been ripping people limb-from-limb the entire movie, love their child so much that they brought it back to its grandparents for safekeeping before dying.

Let's get one thing straight- this is a weird movie that struggles to simultaneously have a moral point while piling on the gore.  Some folks on the web claim that the creatures are intended to be an AIDS metaphor, and given the movie's 1987 release date I suppose that's believable, but honestly I'm not entirely sure that it runs as deeply as that.  More than anything else, I suspect the message is more along the lines of "we're all human after all"...although since we've seen the creatures killing people left and right that point doesn't ring true.  I suppose the argument might be made that the creatures are mostly killing in self defense throughout the film - even the slaughter of the punks occurs when the creatures wander into a rape in progress - but I'm just not buying it.  Hell, when they take over the boat they kill the whole crew and eat them during the voyage.  It's not easy to sympathize with that.

The special effects work is nothing special, but it does have the gross, gritty feel to it that characterized much of the effects in 80s and 90s horror flicks.  The gore effects are serviceable and the costuming is okay, if quite foam-rubbery.  The mutant infants look kind of like lumpy miniature Toxic Avengers, but they don't get a whole lot of unobstructed screen time.  It's not easy to explain, but it's one of those movies where I imagine that the set probably smelled like a wet animal during filming.  (For some reason I've always judged creature flicks that way on some semi-conscious level.  Other films that I imagine smelled weird include Watchers 3, all of the Basket Case films, and Demons 2.  Interpret that as you will.)

This is a hard movie to recommend.  There's not enough of a coherent message for it to be touching, nor are there enough scares for it to really stand on its own as a horror movie.  Michael Moriarty's character Jarvis is really the only character that's around for more than few minutes, and he spends most of the film acting like he just might flip his shit.  I understand that he's meant to be a character at the end of his rope thanks to the extraordinary hardships he's fought through, but he doesn't come across well. He's meant to be cynical and humorous but for the most part comes across as a possibly-deranged ass who engenders little in the way of sympathy.  As for the other characters, I'd have to get on IMDB to even remember their names.

All in all this movie just sort of is.  It's not poignant, it's not scary, and it's not really very fun.  If you've got a hankering for a horror movie about monsters spawned by in utero mutations caused by the callousness of an evil corporation (and who isn't?), I recommend Prophecy, the 1979 killer bear movie starring Talia Shire.  Like this film, Prophecy is dumb as all hell, but at least it has a 15-foot tall skinless murder-bear and a famous scene involving a sleeping bag.  As for It's Alive III, I'd say eternal banishment to a deserted island really is the best solution.

______
The movie poster image at the top of this article is from Wrong Side of the Art, an awesome site with an enormous (and searchable!) library of horror movie posters.  Check it out!

2.) Jarvis is played by Michael Moriarty, who readers may remember from Dan Akroyd's weird PSI Factor show.
Posted by Skippy the Skeptic at 11:34 PM