On July 5th, 1977 a woman named Sandra Mansi claimed to have photographed "Champ", the resident monster purported to haunt the depths of Lake Champlain near the U.S.-Canadian border. The admittedly cool photograph, which has now been thoroughly debunked, was pretty big deal at the time and breathed new life into the public's on again, off again fascination with lake monsters.  Real or not, lake monsters are big business - From the Loch Ness Monster to Champ to Ogopogo, folks just can't get their fill of tales about prehistoric plesiosaurs gliding silently through tourist-laden public waterways.

By the late 1970s lake monsters, especially "Nessie", had been the subject of countless books and had made appearances on TV series such as In Search Of... and even Bewitched.  Still, for all the public interest in the beasts, they didn't get much love at the box office in the 60s and 70s.  Sure, you had aquatic monsters on the silver screen, from Gozilla to the Beast From 20,000 Fathoms to The Giant Behemoth, but these were sea monsters and, well, that's just not the same.  Oh sure, attempts had been made to get lake monsters into theaters.  As far back as 1976, Toho and Hammer had collaborated on a movie about the Loch Ness Monster, but the project never made to the screen.1  Still, theatergoers with taste for plesiosaur-on-human violence were pretty much out of luck..

The film opens as a team of archaeologists discover an ancient Indian cave painting in a heretofore inaccessible cavern.  Depicting a group of warriors fighting (what else?) a dinosaur, the painting would clearly be grounds for a dramatic rethinking of human history...except that the cavern hit by a freaking meteor that same night!  Soon hikers, fishermen, and cattle go missing and it quickly becomes obvious that the meteor has...done what exactly?  Released a full-grown dinosaur that was somehow living without food for thousands of years inside an early American Indian cave dwelling?  Awakened a comatose dinosaur that was sleeping for centuries at the bottom of the lake?  Brought a space dinosaur from the stars to wreak havoc on mankind?  Okay, so nothing's obvious except that a dinosaur is eating people.  What else do we need to know anyway?

The monster itself is a pretty cool effect...sometimes.  Distance shots of the beast are accomplished with pretty slick stop-motion effects by David W. Allen, who would later go on to work on films such as Q - The Winged Serpent, The Howling, and the Puppet Master series. Close shots of the creature use a gigantic prop head that, depending on the scene, looks either fairly good or like a lawn chair wrapped in a garbage bag.  Weirdly, the monster also seems to change colors from one scene to the next.  In the stop motion sequences it's clearly brown, but in some of the prop shots it seems very green to me.  (Maybe it's a lighting issue?)  Legend has it that CIP brutally slashed the budget of the movie midway through production, which accounts for the uneven visual effects. 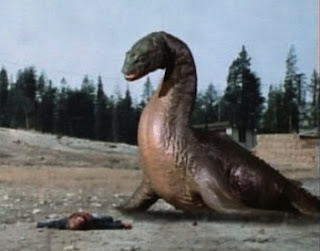 Okay, so maybe it looks kind of like a titanic turd.
I swear it looks pretty good in motion.

Budget troubles also account for the film's famously atrocious soundtrack.  Due to underfunding, the originally planned score was priced out of reach and (apparently random) stock music was used instead.  As a result, half of the music sounds like it came from 1950s space invader flicks and the other half sounds like it came from The Hair Bear Bunch.  If you've never thought about how much sound design can effect the feel of a film, The Crater Lake Monster will be more than happy to show you.

In any event, the movie doesn't offer a lot of nuance plot-wise.  People go to the lake, the monster eats them.  There's a brief subplot about an armed robber being pursued by the sheriff which culminates in the only car chase in movie history in which a vehicle flies off a 30-foot cliff and doesn't explode on impact.  Escaping the wreck, the robber flees towards to lake only to be (wait for it...) eaten by the monster.  Hunting for the suspect, the sheriff encounters the behemoth and from there the film races to its climax - a duel between bulldozer and beast at a local logging camp.  Sadly, the final battle appears of the have been one of the scenes most hobbled by budget woes and the intriguing premise is reduced to a few seconds of awful jump cuts.

I'll be honest, I actually only bought The Crater Lake Monster because I confused it with the even more awful 1981 film The Loch Ness Horror.3  Crater Lake is the better of the two films, if only by virtue of the fact that the monster in Loch Ness Horror is more or less just a big gator grabber toy, but it's by no means a great movie.  Still, it's worth a look you're a big stop-motion fan or you're looking for fodder for a bad movie night.  It recently got the Rifftrax treatment if that's your thing, and it also came out on Blu-Ray last year as a double feature with the 1980 sci-fi/comedy Galaxina.

If you have any interest in reading up on "real" lake monsters, I recommend checking out Lake Monster Mysteries by Bejamin Radford and Joe Nickell.  Although it's not exhaustive, it offers a nice, concise overview of the folklore and facts surrounding a number of famous (and not-so-famous) lake monsters.

_______
1.) Nessie, as the Toho project was purported to have bee called, wheezed along in development hell until 1979 before finally being laid to rest.  A prop for the monster had already bee created and was later used in the 1987 fantasy film Princess From the Moon.  For the curious, the prominent kaiju website Toho Kingdom has a brief article on the project.


2.) The box art for the home release of The Crater Lake Monster seems to be inspired by the Mansi photo.  The actual posters for the film at the time look quite different.

3.) I have very hazy memories of having seen The Loch Ness Horror on TV as a child.  I've long-remembered a ridiculous scene of the monster attacking a Volkswagen van and only recently figured out what film it was from.
Posted by Skippy the Skeptic at 3:47 PM