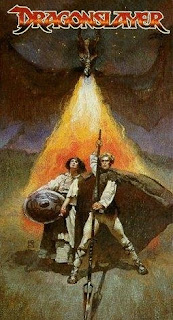 Okay, so the other day I promised a forthcoming review of The Crater Lake Monster, a half-finished 1977 plesiosaur vs. lumberjack flick which practically defines the word "campy".  That review is still coming, but since the 4th of July is practically upon us, I thought I'd let everyone in on one of my personal traditions with a review of the 1981 fantasy classic Dragonslayer.

Now, as a matter of explanation, I have some pretty random personal traditions - I usually watch The Hunt For Red October on the night before Thanksgiving every year, and have been known to stick Aliens in the DVD player while wrapping Christmas presents.  I also tend to buy a lot of fireworks for Independence Day, and with that comes the need to get all the packaging open and fuses prepped the night before.  While I'm lining up my ground bloom flowers and arranging my bottle rockets, I'm watching Dragonslayer.  It's the only time I watch it all year long.

For anyone who's unlucky enough to have never seen Dragonslayer, it's easily one of the best fantasy movies ever made.  The plot's pretty simple: Galen, a sorcerer's apprentice, inherits the task of slaying the vicious dragon Vermithrax when his master Urlich is killed.  Galen is played by Peter MacNicol, who readers will probably remember best as Dana Barrett's non-specifically foreign boss in Ghostbusters 2.  Perhaps more interestingly, the wizard Ulrich is played by Ralph Richardson, who some of you may recognize as the Crypt Keeper in the 1977 Amicus Pictures version of Tales From the Crypt.

"Dragon bad, must kill it" doesn't seem like a very original plot, and it honestly isn't, but the movie delivers a few welcome twists on the standard narrative here and there.  It was controversial for its time due its surprisingly graphic violence.  (It's said to be one of the films, along with Indiana Jones and the Temple of Doom and Poltergeist that ultimately led to the creation of the PG-13 rating.)  The characters are also more fleshed out than one might expect from this sort of film.  It's not The King's Speech, but it's not Ator either.

For example, Tyrian, a lackey for the king and Galen's main foil, could have easily been written as a "mean guy with a sword #1", but instead is presented as a man who opposes the hero out of a genuine sense of duty.  See, Vermithrax is currently kept sated by the ritual sacrifice of virginal girls, and Tyrian doesn't want to see this utilitarian status quo upset by a meddling wizard whose first attempt at felling the dragon fails spectacularly.1  Oh, he's a dick, but you can understand why he's a dick.  His fantastic "we don't do tests" speech has also been referenced by internet skeptics for years.

When I was a kid I didn't care much for the Galen character.  He kind of sucks at magic, and throughout the film he constantly makes an ass of himself and repeatedly fails to accomplish most of the quests he sets out to fulfill.  Slay the dragon?  Nope, he just infuriates it and brings its wrath down on the countryside.  Save the noble, altruistic princess?  Sorry, she gets ripped apart by baby dragons.  Try to slay the dragon again?  More wrath for everyone! Besides, when I was a kid the definitive fantasy hero was Arnold Schwarzenegger's Conan, and Peter MacNicol somehow doesn't compare.

Still, looking at Galen with three decades worth of hindsight, he's actually pretty cool.  For one thing, seeing a wizard character who's just a guy, and not either a Gandalf clone or a 12 year-old is pretty refreshing in this day and age.  Peter MacNicol was around 27 when this movie was made and is more or less portrayed as an ordinary fellow who just happens to have some magical schooling.  If this movie were made today, he'd either be a pre-teen, Jonah Hill, or the Rock and would probably have at least one parkour sequence.  As it stands, his appeal lies in the fact that he's not some kind of superhero.  He goes into each encounter pretty much aware that he's probably going to be gruesomely killed, but at least he's got the guts to try.

Unquestionably, the real star of the film is the dragon Vermithrax Pejorative.  It has a name, it has a personality, and 31 years later the special effects still look pretty damn good.  I don't mean to belittle all the modern special effects technicians that work night and day trying to create perfectly animated CGI effects, but Verimithrax and the superhuman effort that went into bringing it to the screen speak of true artistry.  Vermithrax was one of the earliest uses of go-motion, a specialized form of stop-motion animation first used in The Empire Strikes Back which minimizes the "strobe light" look that traditional stop-motion sometimes imparts on characters.  In addition to puppet work, Vermithrax also made use of full-sized robot parts, such as a 40-foot head and neck apparatus, as well as a full-scale hand.

Read that again and let it sink in.  They built a life-size dragon robot for this movie.  Life-size.  Dragon.  Robot.  That's how its done. 2 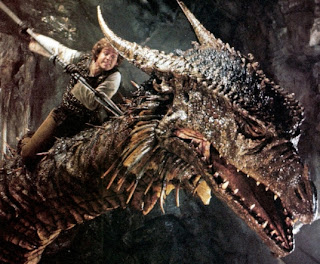 Peter MacNicol riding a robot dragon.
I wonder if some special effects guy has that thing in his house somewhere.

Vermithrax also has a distinctive bat-like design that's been heavily borrowed from over the years.  From Reign of Fire3 to Harry Potter and the Goblet of Fire to Game of Thrones, odds are that if you've seen a dragon on the screen, you've seen a spiritual descendant of Dragonslayer's antagonist.

I could go on about this movie for hours. (And if Joe and Tommy ever do a fantasy film episode, I probably will.)  From the awesome sound design to the gritty, no-frills fight choreography, Dragonslayer is one of those rare movies that's just done well from start to finish.  There's also no sense in ignoring the unsubtle jabs at Christianity sprinkled throughout the film: There's an undeniable sense of schadenfreude when the pompous traveling preacher confronts Vermithrax alone and, mildly put, gets it pretty bad.

It flummoxes me that this movie doesn't get much recognition in some quarters.  Hell, it didn't even make it onto IGN's Top 25 Fantasy Films list - a list which, inexplicably, includes Bill and Ted's Excellent Adventure.  It's easily in my top ten, maybe even top five. Whatever it may lack in originality of plot it more than makes up for in execution and influence on the genre. Seriously, stop what you're doing and go watch Dragonslayer.

Trust me, you won't regret it.
_____________
1.) George R. R. Martin, the guy who writes the Song of Fire and Ice novels, is reportedly a big fan of this film and I can't help but wonder if Tyrian is, just perhaps, the namesake of the Tyrion Lannister from those novels.

2.) Dragonslayer received a Academy Award nomination for best visual effects, but ultimately lost out to Raiders of the Lost Ark.

3.) You know, that movie where Batman and a battle-axe wielding Kentuckian fight dragons with a helicopter in a post-apocalyptic United Kingdom.
Posted by Skippy the Skeptic at 12:07 AM