Against my better judgment, I watched a bit of Ghost Adventures last night. It's no different from all the other ghost hunting shows that have cropped up over the years, and the fifteen minutes or so that I watched consisted almost entirely of night vision footage of a guy wandering around a darkened room waving an EMF detector around at a vase of flowers1. When the EMF detector reached "an incredible" 0.9 milligauss 1, the fellow with the EMF detector proudly declared something to the effect of "I've proven that ghosts are associated with EMFs because as the detector is reading higher, I'm actually feeling a presence here and my hand is going numb." Skip to about 1:33 of this clip to see what I'm talking about. 3

I should also note that for reasons that are inobvious to me, they had set up "vortex pumps" (EMF generators to the layman) throughout the building they were investigating for unexpected electromagnetic readings.

Without getting into the whole "we have no real evidence that ghosts, if they exist, generate electromagnetic fields" thing or the bit about how miniscule electromagnetic field changes like the ones described are not really anything worth noting, I'd like to propose a bit of an experiment. I'd like to see one of these ghost hunter fellows wander around with an EMF detector strapped to his forehead, like in Indian poker. That way the viewers at home could see the levels of electromagnetic energy being generated, while the ghost hunter could give a running account of his own impressions of any ghostly happenings. 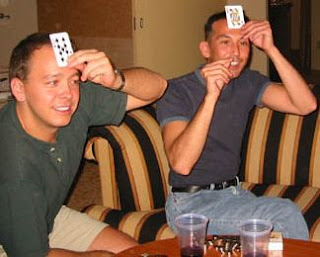 Just imagine each of these guys with a $200 EMF detector tied to his head.
I'd bet you a nickel that, when the EMF detector is invisible to the paranormalist, his "feelings" about supernatural presences around him will no longer synch up quite so nicely with "spikes" in the detector readings like they do on most of these shows. What would such an experiment prove? Not a lot, but I think it would drive homes the point that TV ghost hunters (The ones that aren't just acting, anyway.) tend to derive most of their "evidence" from equipment that they've no clue how to use.
_____
1.) The Ghost Adevntures guys use Mel Meter products, which are designed and marketed specifically for paranormalists. Just sayin'.

3.) Let me take this time to remind you that this fellow is claiming to feel something like an electrical current numbing his arm...in response to an electromagnetic field about 1/55,555th as powerful as a refrigerator magnet
Posted by Skippy the Skeptic at 12:38 PM