I'm a week or so late with this, but the continuing attention being devoted to the so-called Ground Zero Cross utterly baffles me. It's been in the news recently because American Atheists has filed suit regarding in its inclusion in the National September 11 Memorial and Museum, and lots of religious folks are outraged that this "miracle" is under attack. There have been more than a couple of letters to the local paper around here by Christian folks practically pulling their hair out about the whole thing. That's not really surprising, considering that people tend to get a bit worked up about religion. Once you throw something like September 11th into the mix, emotions are bound to run high. 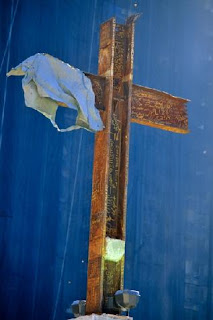 Somehow the memorial to the victims of the worst attack on U.S. soil
has devolved into a battle over the presentation of a piece of debris.
What the controversy, such as it is, boils down to is that American Atheists is concerned that the cross will be displayed at the memorial in a fashion indicating that it's a gen-u-ine miracle and want items from other faiths displayed alongside it. You know, because that somehow...counteracts...the stupid...? Meanwhile the religious folks, while arguing that, as an artifact of the terrorist attacks, it has good reason to be in the memorial, are apparently worried that it might not be presented as a holy relic shaped by the hands of Jesus Christ himself. Former mayor Rudy Giuliani himself made pretty much that exact argument, claiming that the cross definitely needs to be included because of its historical value...but also that it's a magic sign from Yahweh. Right...

For all its value as an historical artifact (and sometimes as a scandalously cynical marketing ploy), the Ground Zero Cross is a piece of debris created when World Trade Center One Collapsed into World Trade Center Six. It's made from the remnants of a column tree connection. Given that every single building at the WTC site was built using a similar internal structure of welded crossbeams, I'm honestly surprised that more "crosses" weren't recovered from the site. There's nothing especially "miraculous" about its formation - when a building made out of crossed girders collapses, there's probably going to be some cross-shaped remnants left over.

I'm not convinced of the value of adding more religious iconography to the 9/11 museum either, be it the non-specific memorial American Atheists has proposed, the Star of David (welded from WTC steel) that's already planned to be a part of the exhibit, or something else entirely. I really don't see the point. 2,977 people lost their lives during the September 11th attacks, and watching people squabble over how many gods are or aren't going to be represented at the 9/11 Memorial is frankly just stomach-churning. The memorial is, or should be, about the people who died that day - the victims and the heroic first responders who sacrificed themselves trying to save lives - not about which god does or doesn't control the universe.

Here's what I say: put the girder cross in the memorial sidewise. Yeah, that's right, on its side. That way it'll be included in the memorial and whatever historical significance it may hold will be preserved. Then we can scrap all the other religious iconography that doesn't need to be there and everyone can quit bitching about the manufactured controversy. Maybe then the focus can shift to making a tasteful, solemn tribute to the innocent lives that were so brutally ended that terrible day. 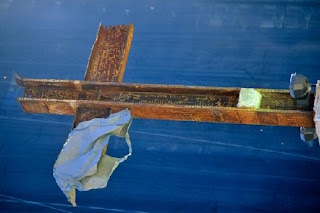 Posted by Skippy the Skeptic at 10:51 PM

Well said. I didn't know about the jewelry. That's repugnant.

9/11 merchandising in general is pretty loathsome. I bought one of the Twin Towers "Imagine No Religion" shirts when they were new and have honestly since had second thoughts about it.

It is not the Christians' fault that there's a cross in the 9/11. They did not weld those two beams to come up with a cross. It just emerged suddenly as a Cross. What can they do?