Alm says that he was able to wear the colander in the license photo by claiming that it was an important article of religious garb for the Church of the Flying Spaghetti Monster. According to Alm, his claims of being a "Pastafarian" qualified him for a religious exemption under the law and his license was issued, albeit after a years-long delay. 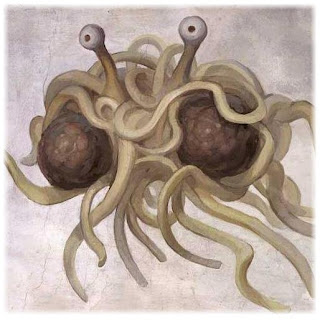 Haven't heard much from the old FSM lately, have we?
There's another side to this story, though. According to the Austrian authorities, headgear is actually allowed in driver's license photographs so long as the person's entire face is visible. They further claim that the license issuance wasn't delayed, but instead that Alm simply took three years to pick the thing up. Hmm.

Honestly, I don't know the exact facts of the case and maybe Alm is stretching the truth here. Who knows? However, what I do is like the implied train of thought behind Alm's course of action. In areas of the law in which the religious are privileged over the secular, it may well be a better model not to limit the freedom of the religious in an effort to achieve parity, but rather to expand the freedom of the secular towards that same goal. That is to say, rather than pushing for a ban on yarmulkes and turbans in license photos, it's more productive to work towards allowing non-obfuscatory headgear regardless of whether or not they serve a religious purpose.1 After all, I think most of us would rather see freedom expand than contract.

Naturally this model doesn't apply to every situation. For example, some states here in the U.S. have laws on the books whereby parents can deny their children simple and life-saving treatment on religious grounds, and I'm hard-pressed to think of situation where expanding the "freedom" to merrily allow children to die from treatable diseases is a good thing.2 Nevertheless perhaps a rhetorical stance that's less "hey, you can't that", and more "wait, why can't everybody do that" should be the default stance when it comes to most issues of religious privilege.

2.) Remember the Neumann case in Wisconsin back in 2008? A diabetic 11 year-old was allowed to die because her hardcore religious parents decided to pray for her rather than seeking medical treatment for her. Her parents were ultimately convicted of negligent homicide, but received only probation. To be fair, Wisconsin's religious exemptions only apply to child abuse and neglect. You know, because beating your kid's okay if Jesus told you to...
Posted by Skippy the Skeptic at 6:31 PM

May the Pastafarians make an ever bigger splash.

1) After denying so vehemently that atheism is not a religion the Pastafarian sect of atheism fights for equal rights to freely express their religious beliefs. As Niko Alm states it, his goal is for “Pastafarianism to become an officially recognised faith in Austria.”

2) The Flying Spaghetti Monster actually proved was that some people are utterly ignorant of natural theology / general revelation. These propose the best that science and philosophy have offer as to the universe’s coming into being. They propose that the universe had a creator and even identify some of the creator’s characteristics.
See http://www.truefreethinker.com/articles/flying-spaghetti-monster-invisible-pink-unicorns-et-al-part-1-4