I was recently talking to one of my coworkers about the movie Paranormal Activity 2 when she asked me a question that caught me off guard: "Why do you like those kinds of movies if you don't believe in ghosts?".1

In real life, my off-the-cuff reply was probably something involving Godzilla, but in a better, hindsight-informed world I might've said something like "well you watch Rudolph the Red-Nosed Reindeer at Christmas time, but you don't believe in flying alpine ungulates with spotlights for noses."

Okay, so maybe that's not a great retort either, but the point is that tons of people watch movies that they know are ridiculous and still enjoy them, so it struck me as odd that someone would assume that I'm somehow such a scowling, closed-minded prig that I can't even enjoy a horror movie. 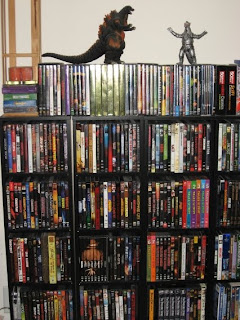 When in fact, I own a couple of horror films...
The fact of the matter is I like the Paranormal Activity films because they're fun to watch. The first one particular was a fairly effective distillation of everything I think is creepy. It doesn't really matter whether or not I think there are actually ghosts out there trying to eat people - if there were it'd be freakin' scary.

Let's think for a second here. If psychic powers were proven to be real, we would have to rethink pretty much everything we knew about physics. If another race of sentient, tool-using, habitually bipedal hominids were discovered, it would radically change the face of anthropology. If alien life - not just intelligent alien life, but alien life AT ALL - were proven to exist...well, it would probably be the most important scientific discovery of all time.

You know what else? All of those things would be Totally. Freaking. Awesome. I can't speak for anyone else, but I'd love it if extraterrestrial life was discovered or a live dinosaur was pulled out of the Amazon...but I'm not going to confuse the degree to which I might want something to be true with the amount of evidence that it actually is true.

Skepticism isn't, as some people like to claim, about saying "that phenomenon can't be real", it's about saying "I'm not yet convinced that the phenomenon in question is real". Bigfoot's a good example of this- There's no biological reason that large, tool-using, habitually bipedal primates can't exist. There's 6 billion of them on the planet right now. However, there's also not a lot of good reasons to think that a heretofore unknown species of a large, habitually bipedal primate really is stalking the woods of the American Northwest while never leaving a corpse, never getting hit by a car or shot by a hunter, and never appearing in front of anyone who can hold a camera steady. Bigfoot could exist...but right now there's no good reason to think that it does.

Skepticism isn't about making claims of what can or cannot exist, it's about making honest evaluations of what is or isn't likely to exist given the available evidence. Hand-in-hand with that is the understanding that one's desire or distaste for something is irrelevant when considering this evidence. The article from Area 51 which I linked to above laments that skeptics "can't imagine a world in which the fantastic is plausible". That's an odd statement in the sense that it's simultaneously sort of true and incredibly misleading. Fantastic claims, even the ones we really want to be true, are inherently implausible...unless they're backed up by real evidence. Forget that at your own peril, lest you end up calling CNN on Christmas morning to announce proof of Santa's existence in the form of half-eaten cookie.

_______
1.) Yeah, that's right, I bought Paranormal Activity 2 despite all my bellyaching on Twitter about how the first one was a prime example of a good movie that should never, ever have a sequel. I saw it theatrically too. Sue me.
Posted by Skippy the Skeptic at 6:11 PM

I would add that in literature it's called "suspension of disbelief." We know that there's no Dunder Mifflin too, but we can watch The Office. We know the Simpsons are fictional. We know that although Atlanta is real and did burn, Scarlett O'Hara never existed (at least as told in the book and movie). We suspend our disbelief in these things in order to enjoy the story.

Of course that presupposes knowing the difference between fact and fiction.

I wonder how many "UFOlogists" have considered whether Thor is real.