Help the Victims of Japan's Catastrophe 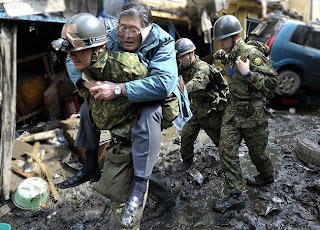 Heroic responders pulling a man from the rubble in Japan.

Like pretty much everyone else on the planet, I've spent the last four days watching the disaster in Japan unfold with a humbled sense of horror. I've wanted to post about it, but to be honest I wasn't sure what I could add to the conversation. Here are a few brief thoughts, though I suspect they're nothing that hasn't been said already elsewhere.

According to Merriam-Webster, theodicy is defined as "the defense of God's goodness and omnipotence in view of the existence of evil". When it comes to evil perpetrated by human beings, we usually get a limp, unsatisfying response regarding free will. When it comes to the astounding devastation occasionally visited on humanity by the impersonal forces of nature, there is no religious answer.1 If there were a god, there'd be no doubt in the wake of such carnage it could only be classified as a malevolent torture-master. No matter how mealy-mouthed you want to be, there's no way around that.

There's no need to fear a wicked deity, for none exists. There are no gods above, no demons below, no magic, no spirits, no supernatural forces to blame in the event of these natural catastrophes or to pray to for succor in their wake.

Luckily there are people who want to help. Even as I type this, the Japanese military and responders for nearly every nation in the world are working to save lives and provide aid to the hundreds of thousands of people suffering in the wake of the nearly unthinkable destruction that has been wrought in Japan by last Friday's earthquake, tsunami, and nuclear disaster. The lesson to take away from Japan's suffering is not one of pious platitudes, but instead it's a lesson in human altruism, the willingness of people to risk their own safety to help others.

As I've watched the news coverage of the tragedy in Japan, I've felt awed by the sheer power and ferocity of nature...but I've also been awed by the headlong rush to provide aid. Heroic efforts are underway to save lives, and the outpouring of compassion makes me proud to be a human being.

If you want to help the humanitarian efforts in Japan, I strongly recommend making a donation to Doctors Without Borders. They're one of the most well-respected humanitarian organizations in the world, and I trust them with my own donations. Other fantastic organizations helping with the relief effort include UNICEF, the Red Cross, and the Foundation Beyond Belief. You can't go wrong with any of these groups. Just be sure to give - it doesn't matter how much or how little. People need your help.

That's all I've got. The scope of the destruction and suffering in Japan has left me speechless. I don't want this post to be read as some snarky fist-pumping about the unreality of god, but instead as a celebration of human altruism and a plea for donations to the help the victims of this latest tragedy. Humanity is a family, and right now a lot of our brothers and sisters need our help.


______
1- No sane answer. Some Youtube videos by the dregs of humanity claiming that Yahweh is punishing Japan for atheism has, predictably, popped up. I'll not dignify them by linking them here, nor will I link to that crass jackass Ray Comfort's giggling blog post mocking atheists for our sympathy and happily spouting on and on about God punishing his"fallen" world.
Posted by Skippy the Skeptic at 9:59 PM