Dowsing is one particular species of woo-woo you just don't hear that much about here in the United States these days. Sure, it shows up every once in a while on a gee-whiz television program or two, but here in the States we've largely moved on to other sorts of gobbledy-gook like psychic detectives and ghost hunting. Alas, in some part of the world dowsing lives on, albeit in a different guise.

In war-torn Iraq, the pockets of British company ATSC have been lined to the tune of $85 million via the sale of an expensive bit of nonsense called the ADE 651 explosives detector. This technological marvel was meant to provide a fast and accurate way of sniffing out IEDs and other explosives, and all for the low price of $56,000 each, largely paid for by American taxpayers. Unfortunately, there was one minor problem with this otherwise fine piece of equipment: it didn't actually do anything. I don't mean to say that it didn't work, I mean it literally didn't do anything, as in no moving parts whatsoever. Check it out. You see, as everyone from the bloggers at Gizmodo to James Randi quickly pointed out, the ADE 651 (along with its kissing cousins the Sniffex and the Quadro tracker) is pretty much just the handle of caulking gun with a straightened coat hanger stuck through it. Sure, it's tarted up just a little bit more than that, but for all intents and purposes that's all it is. They're nothing more than glorified dowsing rods. Keep in mind that these devices are being sold by the hundreds to the Iraqi military and police, as well as the Afghan military, with the promise that they can keep both soldiers and civilians safe from bombs planted by the terrorists currently waging war against the Iraqi and Afghan governments...and they don't really do a thing. 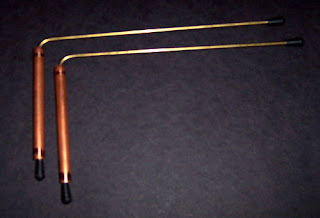 Regular dowsing rods. Just as useless, but cheaper.
Let that sink in for just a minute. Innocent people in Iraq and Afghanistan have been dying because a pack of greedy hucksters is selling their gullible security forces dowsing rods for tens of thousands of dollars apiece, and all this nonsense has been subsidized unwittingly by U.S. taxpayers. How many people have these devices killed? As far as I'm concerned, anyone involved in the manufacture and sale of these devices has blood on their hands.

After investigations proved that the closest thing to a working part in the ADE 651 is an anti-theft RFID tag stuck to the inside of the handle, the United Kingdom banned the export of these deadly little booby traps (and ultimately, what else is a useless bomb detector but a trap in and of itself?) in 2010, and arrested ATSC head Jim McCormick. Alas, McCormick, the owner and sole shareholder of ATSC, has been free on extended bail for over a year now. In a perfect world he'd be given one of his own devices and told to navigate a minefield. If he makes it across, he goes free. If not, then the problem has solved itself. 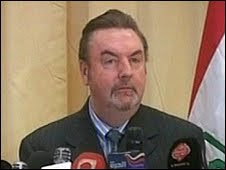 Jim McCormick at a 2009 press conference shortly after 127 Iraqis
were killed by a bomb his device failed to detect.

Horrifyingly, the ADE 651 is still in use overseas and still has staunch defenders in the Iraqi military. Interestingly, despite claiming to have nigh-infinite confidence in the ADE 651, Iraqi Major General Jihad al-Jabiri declined James Randi's offer to allow him to put the ADE 651 to the test for the Million Dollar JREF prize. There's happy news, however: News reports coming out of Iraq this weekend stated that al-Jabiri has been arrested on corruption charges related to the ADE 651. Although the Iraqi government isn't being too specific about the circumstances of his arrest, I can't help but wonder if he was getting some kind of cut from the sale of the things.

In any event, it would seem that the wheels of justice are slowly turning at last, but it's a sad commentary that even in the 21st century people are being taken in by a scam as old as dowsing, and with such deadly results.
Posted by Skippy the Skeptic at 4:13 PM

Just read a book that describes how this scam works. The author was so upset that innocents are being killed by these that he wrote a book about it. Book is Bad Dogs Running, available on the eBook sites. Check it out

Thanks for the tip, man. Sorry it took so long to get your comment up. Moderating the comments on older posts is inefficient, but we've got a troll around here who needs to be kept at bay.

Bomb detector ADE 651 is produced by the company ATSC LTD.