Knowing is Half the Battle...

I've not yet mustered the requisite nostalgia to cough up $10 to see the New G.I. Joe film, but I did happen to encounter the Christian Answers review of the film. I've referenced movie reviews from this site a couple of times before, most notably their review of Iron Man that speaks of "liberal and conservative trade-offs" in the film such as a how "American soldiers are shown being killed" (presumably to the delight of liberals...?) but that "Conservative viewers will be gratified that American soldiers are at least not demonized", so I was a little interested to see what they thought of G.I. Joe. After all, what is G.I. Joe about as a franchise if not the heroic ideal of the American soldier? You know- "G.I. Joe: the Real American Hero" and all that.

Well, apparently G.I. Joe is somehow too liberal for Christian Spotlight. How?! How can a movie about an American spec ops team saving the entire planet from terrorists somehow manage to be "alien to American sensibilities"? Well, let's refer to our dear Christian reviewer Michael Karounos (who also penned the Iron Man review) for the answer.

First of all, he takes issue with the team including "an American black, an English black, an African black (Moroccan), and a masked man who conspicuously looks black" as "four of its six members". He's actually just plain wrong here - There are nine G.I. Joe team members in the film, of whom six, including all of the commanders, are white. Also, the "masked man who conspicuously looks black" is freakin' Snake Eyes. Snake Eyes is a white guy, is played by a white guy and only "looks conspicuously black" because he's a ninja wearing black clothes! 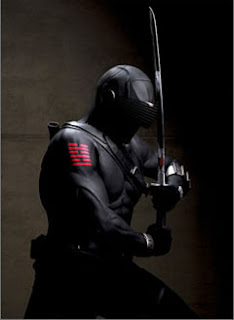 ChristianAnswers.net - Racist against ninjas?
That sounds dangerous....
Exactly why Karounos is against black characters, or even characters wearing black clothes, is never spelled out. He makes reference to a the film's director talking about how the film is for "an Obama world", which admittedly sounds kind of silly but is presumably a reference to the G.I. Joe team being a collaborative effort between the U.S. and other nations. For whatever reason Karounos seems to want to take the statement racially.

Secondly, he's angry that the terrorists in the film are "not Muslim". I'm not sure if Mr. Karounos just isn't aware that G.I. Joe is a pre-existing property that already has established villains or if he just doesn't understand that not every film has to be an expression of Glenn Beck's deepest fears. Strangely, he even notes that Destro, the film's main villain, is Scottish...about two paragraphs before he complains that all the villains are American. He goes on to complain that a scene in which the character "Breaker", portrayed in the film as Moroccan, fights to protect the city of Paris is "ironic" and "deluded".*

Finally, our friend complains bitterly that G.I. Joe is "not nearly as good" as the recent Transformers sequel but that it's ranked better on the movie review site Rotten Tomatoes. The reason for this travesty? According on Karounos it's because of Rotten Tomatoes' "liberal sensibilities". Nevermind that a.) Rotten Tomatoes is a review aggregating site that reports on reviews but does not issue its own reviews and b.) G.I. Joe is currently sporting a whopping 39% postive score, placing it well into the site's "rotten" category - hardly indicative of a liberal conspiracy to hype the film.

Keep in mind I'm well aware that there's really nothing all that productive about chomping down on a silly movie review from a niche Christian entertainment website and shaking the life out of it like a monitor lizard fighting a snake. That being said, I'd like to think that analyzing our friend's complaints about the film illustrates at least some of the hang-ups of the conservative bible-waving set - Namely that a movie might dare suggest that international cooperation can be useful and have scandalous temerity to depict non-white, non-American characters as anything other than Koran-throwing, turbaned terrorists. Seriously?

*To be fair, Breaker was a white American character in the original cartoon, but Karounos isn't complaining that the character was changed, he's complaining about the very idea that a dark-skinned Moroccan man would be depicted coming to the aid of white French civilians.
Posted by Skippy the Skeptic at 2:54 AM

Excellent, excellent analysis of the review. I am a Christian and often use that website for reference. However, I did find his review to be way off based. You touched on my exact sentiments. Good job!

Thanks for the kind words.

That Karounos guy is just kind of weird. Amusing though I may find it to be, I don't have some kind of moral argument against a guy saying (for example) "I'm uncomfortable with the Harry Potter films because the witchcraft elements don't mesh with my religious beliefs" - BUT - When a reviewer's "Christian" objection to a is movie is that there are black guys in it, something probably needs to be said.