A Look at the Legend: "Don't Make Me Go Back, Mommy"

Okay, so a couple of months ago I was pretty hyped about getting a copy of Don't Make Me Go Back, Mommy, a weird children's book about Satanic Ritual Abuse. It was produced during the height of the big Satanism scare and it's attained a semi-mythical status among SRA researchers because it contains illustrations like this: 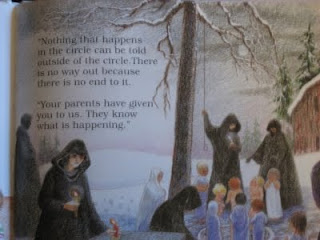 I don't recall a scene like this in The Pokey Little Puppy.

Yes, that's a picture of black-robed Satanists menacing naked children with a noose in a snowy forest with the caption "Nothing that happens in the circle can be told outside of the circle. There is no way out because there is no end to it. Your parents have given you to us. They know what is happening." Pretty creepy stuff.

Unfortunately that's also kind of the money-shot of the book. I had planned to do a full review of Don't Make Me Go Back, Mommy, but it's virtually impossible because the story is presented, as the back cover notes, in vignette format. We see little snippets of the story: Little Allison suddenly doesn't like chicken anymore; Little Allison misbehaves at home; Little Allison is scared because Halloween is coming; Little Allison takes part in the above-pictured Satanic Mass. Ultimately, with the help of a heroic SRA counselor, the police arrest the swarthy proprietors of little Allison's daycare and they go to prison. Finally, Little Allison gets a kitten and learns to love again.

As you can see, there isn't much to this book but a vapid repetition of the standard ritual abuse claims followed by a warm, fuzzy ending. In a sense that's to be expected - it was part of a larger children's book series called "The Hurts of Childhood" that was intended to help kids and families move past traumatic experiences. Critically examing the claims at hand wasn't a priority for the author*- the only priority was trying to help the children. In and of itself trying to help children is a noble goal, but bad things happen when a social movement is built around having a big heart and an empty head.

This unthinking mindset wasn't limited to Don't Make Me Go Back, Mommy, it was symptomatic of the entire Satanic Panic: Lots of good intentions, lots of fear, but very little critical thinking. This book may be a curiosity, a quaint relic from a truy bizarre period of recent American history, but it's also an emblem of the harm that can be caused when society gives into fears that aren't backed up by fact.

_____
* Officially the book was written by Doris Sanford, the lady who penned the rest of the "Hurts of Childhood" books. Rumors abound, however, that the story is actually the work of one Laurel Rose Wilson, aka Lauren Stratford. Stratford is most famous for writing the pseudo-autobiographical book Satan's Underground, in which she claims to have been victimized for most of her life by members of a sprawling Satanic cabal. A thorough discussion of Stratford's claims can be found here.
Posted by Skippy the Skeptic at 7:39 PM

Creepy stuff. I always had the feeling that the people pushing the panic buttons wanted the stories to be true, simply so they could have something tangible to point to and cry "See?!?!? We TOLD you they were EEEEEVILLLLL!!!!"

You'll have to let me see the whole book sometime.

Well, the evangelical resurgence in the 1980s had certain apocalyptic expectations that the idea of widespread devil cults kind of spoke to; So in a way there probably -was- a sense in which some people wanted it to be true inasmuch as it was taken to be a portent of the end times.

Interestingly, as addressed by Debbie Nathan in "Satan's Silence" and Mark Pendergrast in "Victims of Memory", the Satanic Panic was also marked by a weird alliance between the evangelicals and the feminist movement, which was attached to the SRA scare by way of their philosophical/rhetorical support for the whole incest/recovered memory/survivorship movement.