I've been milling around over at Above Top Secret again (I'm a glutton for self-punishment) and, as usual, it's left me kind of confused. There are few people more imaginative than conspiracy kooks, but they're amazingly unable to grasp the idea that the people of ancient cultures could actually possess enough imagination to create art depicting events and creatures that weren't real. I say this based on this thread about "Alien Influences on Mankind" that basically offers up a slew of weird cave paintings, sculptures and whatnot mixed with comments from a fellow named SuperSlovak to the effect of "if someone made this painting/sculpture/unintelligible blob then they must have actually seen something like looked like it, ergo it must be real!" Longtime readers may recognize this sort of logic from other species of kooks as well, such as our dinosaur-lovin' pal Phil O'Donnelll. (For example, this page on his site that shows, among other things, a statue of a dragon as proof that live dinosaurs still exist.)

One has to wonder just how far such an attitude can possibly extend: 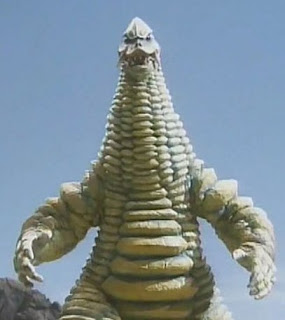 A picture of Red King: Clear evidence that giant rock-throwing monsters
are alive and well and living in Japan...?

In a sense though, I suppose that oddballs like SuperSlovak and his ilk are at least internally consistent. After all, they seem to have trouble distinguishing their own fantasies and wishful thinking from reality, so why should they be able to distinguish the products of other people's imaginations from reality?
Posted by Skippy the Skeptic at 9:40 PM


...that would be creepy

At risk of driving the discussion down a rabbit trail, I'll point out that live dinosaurs do still exist. There are, no doubt, several in the backyard right now.

JAK's right of course, but our friend Phil is arguing for modern dinosaurs in the vein of Triceratops rather than Cyanocitta Cristata.