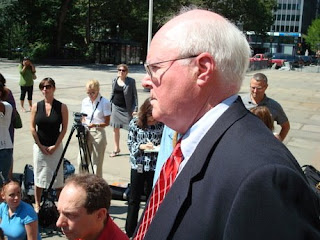 Even some Catholics are getting sick of Bill Donohue's perpetual outrage strategy.
Donohue, that is. A group called Catholics for Choice has released an fierce 26-page article decrying Bill Donohue and his Catholic League as little more than a reactionary attention machine dedicated to stamping out Donohue's own pet peeves through a bizarre combination of bullying people and claiming persecution. They further note that the Catholic League argues "for the right of conservative Catholics to impose their values in the public sphere, while arguing against the right of others in the public sphere to offer legitimate criticism of Catholics or Catholicism." Check out the full document here. The "key findings" listed on the second page are worth a look in and of themselves.

I can already see Donohue's reaction, though. Clearly these opposition Catholics have been infected by us evil secularists and are trying to destroy the church from within...
Posted by Skippy the Skeptic at 9:08 AM