As I'm sure most of you have guessed, my favorite place to hang out online is the website for the American Family Association. It's a website run by fundagelical oddballs who spend most of the year obsessing over what the gay folk are doing, but this time of year they really start caterwauling about the good ol' "War on Christmas".* All of this generally takes the form of a whole lot of pissing and moaning about companies that use the term "holiday" rather than "Christmas" in their advertising. (You know, because they couldn't possibly be selling Hanukkah or New Year's stuff at the same time.) The AFA even goes so far as to promote a "Naughty or Nice List", complete with the phone numbers of the offending companies so people can call and complain. If you're so inclined, you can also order buttons and stickers emblazoned with the slogan "It's Okay To Say Merry Christmas". (I was going to take a dig at them about the prices, but they're actually quite reasonable.)

The AFA lives in a fantasy world where "there are companies and individuals who want to ban "Merry Christmas" and replace it with 'Holiday Greetings'". Now I'm not sure AFA chairman Don Wildmon does his shopping, but I certainly don't see any paucity of "Merry Christmas" stuff lying around. Hell, the stores had Christmas stuff out before Halloween. What I do know is that by whining about how "Merry Christmas" is the only acceptable holiday greeting and getting their undies knotted up about freakin' Best Buy not using the word "Christmas" in their newspaper ads, AFA is completely missing the point: There is no war on Christmas because Christmas has already been secularized.

I myself will be putting up a Christmas tree the day after Thanksgiving and I'm a freakin' atheist. It will even include my (atheist) girlfriend's saccharine-sweet "Precious Moments" nativity in which all of the characters are macrocephalic, doe-eyed baby-people. And, horror of horrors, I'll even play a fair amount of religious Christmas music because it's not nearly as annoying as the rock-a-billy crap that gets passed off as Christmas music these days.

"What the hell", I can hear you ask, "Why would an atheist do something like that?"

Because it's what my family did when I was a kid and I enjoy it. There's something to be said for harmless tradition - Just ask the British, up to 44% of whom are atheists (Source), but who still, stunningly enough, have freakin' Christmas. You don't have to believe in something to have fun with it - see Halloween, for example, or note that I still call today "Wednesday" even though I don't believe in Odin. I bet that very suggestion burns some people up, but it's true. I can go through all the traditional Christmas motions: Put up a tree, listen to carols, bake cookies (Okay, so I can't do that, but my girlfriend can.) utilize reciprocal gift-giving to express a fraction of my feelings of affection for my family and friends, even go to church with my folks on Christmas Eve, enjoy every single minute of it...and not believe even a tiny bit of the supernatural hokum attached to it. 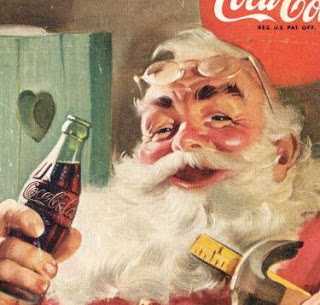 Santa knows that Christmas has already been largely
stripped of its religious significance.

The AFA doesn't get that. They don't care if I don't believe it, they just want to see me going through the motions, and that's jacked up. They can't conceive of a smiling atheist at Christmas. They seem to think that we all going around shaking our fists and peeing on people's Christmas lights - as if by bullying other people into acting a certain way we could actually change what they believe. But there's a good reason the AFA should feel that way: Their whole modus operandi is built around bullying people into acting a certain way. That's what the whole "Merry Christmas" vs. "Happy Holidays" ballyhoo is about - trying to strong arm people into expressing good intentions in one particular way and claiming that the other is unacceptable. The AFA wants to grumble, groan, and cry foul until, instead of two innocuous greetings that don't actually offend anyone, we have one greeting that Christians are supposed to be offended by because it's not "Christian enough" and another greeting that's been weaponized into a big middle finger to everyone else. What exactly is the good that comes of that?

The whole idea championed by some of these religious groups that appearance is everything is something I don't get. Are they honestly so insecure in the reality of their religion that the celebration of their biggest holiday is thrown into disarray because the phrase "Merry Christmas" doesn't appear anywhere in the Sunday ad from the Gap? Are they so adamant that every state capital needs a taxpayer-funded set of nativity figures that they forget the fact that they can put 50 nativity scenes in their own front yard if they want to? Are they really so terrified that there might be (gasp) secularists around that they'll get pissed off if someone has the temerity to wish them "happy holidays"?

The problem for the AFA and similar groups is that society (including 92% theistic American society) really has created a modern version of Christmas that has as little to do with the Christian one as the Christian one has to do with the pagan solstice celebrations that most of its rituals are borrowed from. That's the trouble with memes - they evolve and change over time. It's also why I'd be comfortable making a bet that many more people will watch Rudolph the Red-Nosed Reindeer than go to church this Christmas.

*They also host a weekly all-Christian TV and Podcast program about how Christian folk are "silenced". Don't think about it too much or you'll realize that it's the very definition of irony.
Posted by Skippy the Skeptic at 5:13 PM

Heh. Yeah, I'm atheist married to a (mostly lapsed Moslem), and we celebrate Christmas, too. I mean, hell, if you know the history of it, the holiday's such an incredibly mangled mix of traditions now (including a lot from effectively dead religions, and a lot of stuff you can hardly attach to *any* particular tradition, unless Coca Cola's PR wing now files a 501c), it's not as if it's something to get yer knickers in a twist over. My Moslem wife wanted the tree... it was forbidden fruit for her in her childhood. We do the present thing and the stockings, mostly for the kids, spend a little more time together, I put Baileys in my coffee a bit more, it's all good... I mean, that's what the midwinter celebrations were really about in these northern climes anyway, before (and, in the saner communities even, to a large extent, *after*) it was Christianized: coping with the longer nights by huddling together around the fire, slacking off, having a little fun.

One of my personal Christmas traditions is wrapping gifts after everyone else goes to bed while watching a horror movie. Not exactly traditional, but it's fun for me...