I've been laying it on pretty thick with the political posts on here lately, so I thought it'd be a nice change of pace to throw some more peculiar conspiracy silliness your way. Embedded below is a video from the Youtube user PlanetXNews that's sure to be worth a giggle. For the first minute or so this video could be any old creatard yarn: "No transitional fossils, no such thing as macroevolution*, scientists lie". By this point one might be expecting to hear some quotes from Ken Ham or Kent Hovind, but then we get a swerve - Religious creationists, she says, are also wrong. Humankind is all the work of freakin' aliens!

You see, this lady claims that aliens came to earth long ago and genetically engineered humans as slaves. (Like in that H.P. Lovecraft story At the Mountains of Madness.) It's just the usual "ancient astronauts" sort of stuff, and in this case it all comes from the "work" of a fellow named Zecharia Sitchin. Sitchin claims that ancient Sumerian artifacts record the story of how mankind was created by super-beings from Nibiru, a planet with such a long elliptical orbit that it rarely mingles with the rest of the planets in the solar system. (How an advanced alien civilization could have arisen on a planet that spends thousands of years at a time so far away from the sun that it would be frozen solid is never really addressed.) According to Sitchin, the Old Testament is just a wholesale corruption/simplification of these Sumerian stories and the Biblical creation myth incorrectly refers to our mighty alien taskmasters as angels. Sithcin also apparently supposes that his degree in economic history somehow allows him to translate ancient Sumerian better than, I dunno, every other Sumerian-reading scholar of antiquities out there who says that he's either mistranslating things or making them up from whole cloth.

Interestingly, Sitchin himself has fallen out of vogue with some ancient astronaut buffs, but some of his ideas have been adapted into the occasionally popular conspiracy theories about rogue planets propagated by folks like Nancy Lieder, a lady who runs a website in which she also details her exploits psychically channeling the voices of space aliens. For those of you lucky enough to have missed out on the rogue planet craze, it's an end-of-the-world scare about a gigantic planet with an extremely elliptical orbit that is, conveniently, soon to come crashing pell-mell through the solar system and kill us all. (Actually it was supposed to do that back in 2000 or so, but when that didn't happen the True Believers™ "recalculated" the date, as they always do, to 2012.) Different individuals tend to use the terms "Planet X" and "Nibiru" interchangeably, but at this point it seems that "Nibiru" is more popular.

A thorough discussion of rogue planet theory is a better left to people with actual backgrounds in astronomy, for they are better equipped than I to explain why it's asinine. For an in-depth discussion of the Lieder's role in the Planet X craze, as well as a breakdown of the physical impossibilities of such an arrangement, check out Phil Plait's enormously informative dissection of the matter here. For a look at the more current "Nibiru" incarnation of the whole mess, I recommend David Morrison's article in the current (September/October) issue of Skeptical Inquirer. 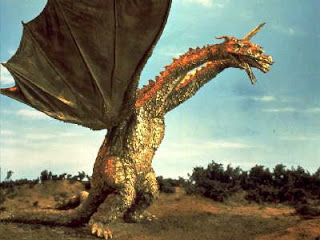 Rogue planet, schmogue planet - Everyone knows the real danger from Planet X is King Ghidorah.
Back to our Youtube friend's evolutionary claims, I'm a bit confused as to why, if the aliens specifically made humans as slaves, there would also be no transitional forms (as she claims) between other, non-human, species. According to this lady's logic, it would make sense if there were no transitional forms leading from ancestral primates to modern humans (There are plenty, of course, but just for the sake of argument...), but why would the aliens bother to engineer things like giraffes or sloths? Her argument is further boggled by her apparent lack of understanding of what a species is. When she's talking about how horses "change and develop their shape and form" (Isn't that evolution?), she's displaying as evidence a chart of different species of horses even as she saying that there aren't different species of horses! I think she's trying to make a sort of "kinds" argument, like a regular creatard, but that she doesn't quite know how to express it.

I've long been curious as to why "Intelligent Design" groups don't welcome folks of this particular bent with open arms. After all, this lady really isn't saying anything about human origins that Bill Dembski doesn't also prattle on about. Since ID is supposed to be non-religious, you'd expect to see more of these Erich Von Däniken-types hanging out at the Discovery Institute. Curiously though, it turns out that all of the Discovery Institute's henchmen happen to be religious Christians, with nary a Nibiru-descended, genetically engineered space slave among them. Regardless of the reluctance of regular creatards to accept space creatards into their ranks, life is made convenient for skeptics because both groups remain wrong for essentially the same reasons.

For one, fossil evidence of transitional forms is much, much stronger than either group will admit. See for example this video that discusses transitional forms from the evolution of whales. Secondly, in either the case of a supernatural god or super-advanced aliens, we have an issue as to where they came from. Anything on that order of complexity would have to have either evolved through natural selection or, for the sake of argument, had an equally (or more) complex designer of its own. If we go with the second option we, of course, run into a problem of infinite regress.

Now, a canny space creatard might make the argument that they aren't saying that no evolution occurs, only that humans didn't evolve naturally. Perhaps our alien overlords did evolve by natural selection, they might say, but humans themselves did not. Unfortunately for our current friend, her argument is is rooted in the premise that progressive evolution does not occur, so she has effectively disallowed herself from making this argument. Even if she did make the claim that aliens evolved but humans did not, acknowledging the possibility of complexity arising from natural selection cuts out the need for alien interference in the rise of man. Since the only evidence she appeals to are the "ancient stories" that Sitchin concocted about Nibiru, she must find some way to back up the claim that this particular set of "ancient stories" is the correct one. There are lots of ancient creation myths. Even if the Nibiru thing wasn't just made up by Sitchin - That is to say, if the ancient Sumerians really did think that aliens made them - how does one reach the conclusion that the Sumerians were actually right? What really makes it more believable than say the Norse myth of the frost giant and the cosmic cow?

Finally, a clever space creatard might try to argue that the chromosome fusion demonstrated by human chromosome 2 is evidence for artificial modification of the human genome by those clever spacemen. (See here for details on human chromosome 2 and why it's devastating to the creationists' case.) In some bizarre way "aliens did it to cause us to evolve from other primates" almost sounds like it makes it a little more sense than "God did it so it would look like we evolved from other primates". Indeed, if humans were the only creatures to display chromosome fusion maybe that argument would at least carry a little rhetorical weight. Now, our friend doesn't make this argument (Though I've seen other space creatards make it.), but if she did, one would only have to point out that the phenomenon of chromosomal fusion in other species is well-documented. There's no need to resort to alien intervention to explain something that is known to happen through natural processes. To make a claim that "well, maybe it happens naturally in crickets but in humans it was caused by aliens" is pure special pleading.

In any event, all our friend has really succeeded in doing is packing an enormous amount of silliness into four short minutes. In a way it's almost impressive - she's managed to create an extraordinarily tangled web of utter wrongness.

*Macroevolution and microevolution are false creatard distinctions designed, I contend, to allow creationists to admit the most undeniable examples of evolution while trying to claim that true speciation doesn't occur. Sorry, but it's all evolution, baby.
Posted by Skippy the Skeptic at 2:49 AM

One thing that I feel the need to point out is that the term "transitional fossils", as a practical matter, is almost meaningless. All fossils are transitional.

Transitional fossils, in the sense that the term is typically used by creationists, is used to imply that there are very crisp, easily identified boundaries between species, which in turn implies that somewhere along the line you could notionally identify an event where a mother Almost-But-Not-Quite human gave birth to an infant Full-human.

If we assume for a moment that we could collect the fossilized skulls of every hominid individual that ever walked the Earth and arrange them chronologically, (for example, your skull next to your mother's, which is next to your grandmother's, and so forth), the differences between any two adjacent skulls will be negligible. The differences between skulls of the same lineage separated by thousands of years will be more pronounced, and the divergence will be more apparant as you trek farther back. The key is that at any one point in the lineage, adjacent individuals are recognizably the same.

The point that most anti-evolutionists miss in the discussion is that evolution is a continuous process at every meaningful level. For many of the anti-evolutionist arguments to work, evolution would have to be a very discrete stairstep process, and that simply isn't the case.

Yeah, lots of creationists have a conception of evolution that is closer to Pokemon than paleontology.