For the most part, I do my best to avoid talking about personal matters on the blog.  Blogs are inherently something of an ego trip, and while I may have convinced myself that some small portion of the world may care about my opinions about faith healing or Godzilla, I'm not far enough down my own rabbit hole to think that anyone wants to read my life story.  I made it a rule from the beginning that I would never ever post anything about any drama going on in my own life - I have friends to help me deal with that so I have no need to turn to the internet for it.

One of my cats died today - he had to be put down.  I know, I know, that's the sappiest first-world yuppy problem, right?  Doesn't matter.  I loved that cat, and more importantly my wife loved that cat.  His name was Tigger, and I caught him from the wild about nine years ago when he emerged from an abandoned garage near my parents' house. 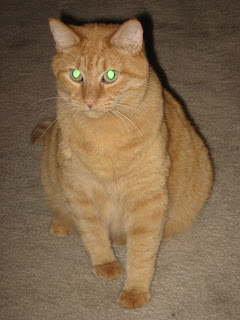 He was...a cat.  Hobbies included sitting on tall things, chewing his toenails loudly, and carrying around a rainbow-colored rattle mouse.  His original role in the household was as a gift to my wife, and he got the point that he followed her around everywhere.  I'm not going to go on about him, but rest assured that he was an awesome cat for all of the reasons that anyone who owns a cat thinks their cat is uniquely great.

He started having some health issues before Christmas and despite our best efforts he went downhill very quickly.  We never got a firm diagnosis as to what was wrong with him - he just started wasting away day by day.  We did extensive - and expensive - tests for the better part of a month.  Today he went in for more lab work and they found that his liver had failed.  He had already lost more than half his body weight, could barely stand, and was unlikely to survive any aggressive treatments.  We had to let him go.

I'm kind of very extremely childishly sad that he's gone.  It's a shitty thing, to have something...someone... you care about sicken and die so suddenly.  A few weeks ago he was a happy, chubby cat and now he's just gone.

In one respect though, I feel good about it.  He died with peacefully and without pain in the arms of people who cared about him.  Plus, I can honestly say I have nothing but good memories of that cat.  That's a perk of pet ownership - you never have arguments with them.  There's no bickering, jealousy, or grudges with a cat.  They just want hang out with you and rub their buccal glands all over your stuff.  It's an amazing thing, really, to have a critter running around in your life that you feel 100% positive towards.  It means when he's gone you don't any regrets, no "coulda'-saids" or "but-I-meants" to haunt you.

It's not nearly so easy with people.  There's no afterlife in which to make amends, no matter how much we may wish there was.  The time we have is incalculably precious because it's the only time we have.  I can't help but think today that instead of a cat passing away, it could have been my wife or one of my parents, brothers, or friends - members of  the occasionally complicated, sometimes difficult, but always worthwhile network of relationships that I'm privileged to be a part of.  It's not nearly so easy to maintain those relationships as it is to be buddies with a cat, but it goes without saying that it's more than worth the effort.

I like to think that atheists...well, materialists in general, have a more...tangible, I suppose, grasp of the beauty, worth, and fragility of life than the folks who spend their days hoping for heaven.  If this is the only life we get - and I honestly believe that it is - the it's all the more important to say and do good things for the people in our lives while we have the chance.  We all lose sight of this sometimes, but tonight, at least, I can see it very clearly.

I promise the next post won't be so maudlin, but please allow me the final indulgence of posting one last picture of my pal. 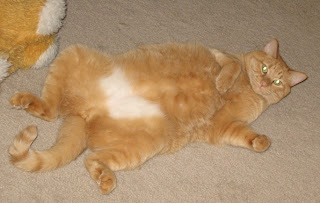 Eons of matter flowing from spot to spot throughout the universe,
combined with millennia of random feline sex,
gave us nine years of this pudgy cat with underpants and a cowlick.
I miss you already, buddy.
Posted by Skippy the Skeptic at 8:37 PM

Sorry dude. I literally found this 5 minutes before I read that you had to put down your cat, and felt it was appropriate to reply with:

Thanks man. That pretty much hits it right on the head.