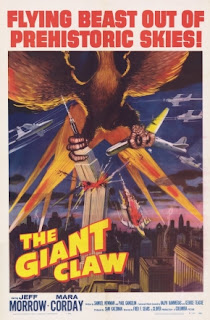 The forties, fifties, and sixties spawned something of a pantheon of schlock movie producers, men whose names are still spoken of in hushed tones even today: Samuel Z. Arkoff, Henry Saperstein, K. Gordon Murray.  Also standing astride that B-movie Olympus is "Jungle Sam" Katzman, whose enormous body of work includes everything from Mark of the Gorilla to the Elvis Presley flick Harum Scarum.1.  Katzman is well-known for producing a number of very influential sci-fi flicks in the 1950s, including a pair of Ray Harryhausen classics, It Came From Beneath the Sea and Earth vs. the Flying Saucers.  Still, you can't have your hands in that many films without leaving your fingerprints on a few steamers, and today we're going to talk about one of them: The Giant Claw.

If you've ever seen the (much better) film Rodan, you've pretty much seen the The Giant Claw.  Both  films structure their action around hazy sightings, close calls, and finally destructive attacks by an impossibly huge avian monster.  In both cases the creatures are too fast to be tracked by aircraft and in any event are nearly impervious to conventional weapons.  I'm not making any claims that The Giant Claw was influenced by Rodan, but I will point out that Rodan debuted in Japan a year before The Giant Claw and in fact came out in the U.S. just a couple of months before it in 1957.  Just sayin...

In any event, The Giant Claw centers on ace test pilot Mitch McAffee, who's the first man to encounter the bird during a training flight.  Initially unable to convince his bosses in the military that he actually saw something and isn't just losing his mind, it's McAffee who eventually figures out the bird's flight pattern and allows the armed forces to intercept the beast.  You see, McAffee is able to deduce that the bird is flying in an enormous spiral pattern...despite the fact that all of its attacks, as shown on an on-screen map, take place in a line moving directly southeast. 2

Now that they can predict the bird's course, the air force sends a flight of jets to engage the monster.  This marks the first time in the film that the audience really gets to see the bird...and it's a noodly mass of feather dusters and flaring nostrils topped off by a huge white mohawk.  As anyone who watches these sorts of movies no doubt expects, conventional weapons are "worse than useless" against the bird.  In the best sequence in the movie, the bird swats the aircraft out of the sky and then devours the pilots as they try to parachute to safety.

We soon find out that the vulture-like beast is a space monster.  It's nearly invulnerable because it can project an anti-matter force field for reasons that are only half-explained.  In any event, worldwide air traffic is completely grounded in the hopes of cutting off the bird's food supply.  Unfortunately, this only provokes the monster into attacking targets on the ground, gulping down cows like popcorn and laying waste to cities in its quest for food.  Eventually McAffee, who's the only character in this movie that actually does anything, tracks the bird to an enormous nest in the forest.  He discovers the beast roosting on a huge egg, which he immediately shatters with rifle fire, provoking a series of terrible reprisals.

Finally, McAffe - who at this point is apparently also the smartest theoretical physicist in the world - single-handedly builds a ray gun that fires muonic atoms.  In the movie world, this is somehow the only thing against which space birds are vulnerable.  The weapon is mounted onto a B-52 and stock footage ensues as the heroes rush to destroy the bird as it lays waste to New York City...but also specific buildings from L.A. and Washington D.C. because they had some footage from War of the Worlds and Earth vs. the Flying Saucers laying around.  With its force field disrupted by the muonic ray, the bird is anticlimactically felled by about three bottle rockets and the film very abruptly ends.

Although it's pretty infamous these days, The Giant Claw is pretty much par for the course in terms of cheap 1950s monster flicks in terms of its mad-lib of a plot and ultra-cheesy "science".  Although it's honestly not that much worse than a lot of other flicks from the era, The Giant Claw has gained prominence in the internet zeitgeist in the last few years thanks in no small part to its inclusion in the 2009 edition of James Rolfe's extremely popular Monster Madness series of Halloween film reviews.  If nothing else, it's known for its utterly laughable monster design, which looks like a cross between Jimmy Durante and one of those old Limber Louie marionettes  Legend has it that at one point in the film's production the creature was intended to be a stop-motion effect, but budget issues forced the use of a puppet monster that looks, to borrow a phrase from Chaucer, totally flippin' ridonculous.

Make no mistake, The Giant Claw is a bad movie.  I'm just arguing that it's not as -uniquely- bad as some folks would have you believe.  I really can't recommend going out of your way to see it, especially since the only licensed DVD version of it available in the U.S. is part of a relatively expensive Sam Katzman boxed set.  More than anything else The Giant Claw is just kind of boring; just another paint-by-numbers 1950 sci-fi flick.  If you're a huge fan of giant monster movies then maybe The Giant Claw is worth a look, but there are a lot better "death from the skies" flicks out there.  For your average Joe looking to scratch that specific itch, I'd recommend either Rodan or Q, the Winged Serpent.

________
1.) Mark of the Gorilla was a Jungle Jim film, one of several Katzman worked on and which were based on a popular adventure comic strip. It was due to his early work on these sorts of films that he came to be called "Jungle Sam".
2.) It's the McAffee character who first refers to the monster as "a flying battleship", a phrase that will be uttered at least a dozen more times throughout the film and which has now become something of an internet meme.
Posted by Skippy the Skeptic at 1:27 PM