More Christmas Nonsense From the AFA...

Well, it's that time of year again: The American Family Association has rolled out its bitch list Naughty or Nice List. It happens around this time every single year, and yet somehow I'm freshly amazed every time.

You see, the American Family Association is a conservative a Christian organization that combines hilarious oversensitivity with enormous amounts of free time in order to scour thousands of advertisements to root out companies that don't expressly use the word "Christmas" when trying to get you to buy their products.1 Apparently they think Jesus gets angry if he isn't mentioned by name in the Victoria's Secret catalog with all the sexy Santa costumes in it.

Check out the AFA's criteria for judging whether or not a company is "against" Christmas:

Victoria's Secret really is on their "naughty list", but if the AFA's own site is to be believed, the company is "naughty" only because it doesn't use the term "Christmas" in advertising its "items associated with Christmas"and not because it trades exclusively in sexy under-things. Conversely, JCPenney is considered "nice" because (among other things) you can get to this by visiting their website and running a search on the term "Christmas thong". Makes sense to me...

I write about the Naughty or Nice list every year, and every year I find something else about it that boggles my mind. What sticks out to me at the moment is that it's only the wording of the advertisements that the AFA takes into account rather than the actual items a company sells. Does that mean that a store selling "holiday trees" is giving Christmas a giant middle finger, whereas PetSmart is being utterly reverent towards the Christian aspects of the holiday by using the word "Christmas" to advertise canine Santa costumes? If the AFA's own literature is true, then the answer is yes.

But hey, it seems like their bully tactics are working. Each year their "naughty" list seems to get a little bit shorter, so maybe there's something to this. Perhaps it's possible to steer to the meaning of a holiday by shrilly dictating the language used to discuss it. You know, there's a certain Christmas tradition that I'm attached to, one that's been shunned by most of my fellow Americans. Maybe, just maybe, this would work:

Skippy's "Keep the Krampus in Christmas" Naughty or Nice List! 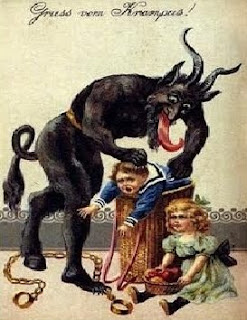 That's it! I've had enough of my pal the Krampus being left out of America's Christmas zeitgeist. He's a longstanding tradition throughout large parts of Europe, but he's been utterly "censored" out of American culture in favor of Santa Claus just because he's a hairy black monster who catches naughty children on Christmas Eve and flays them silly with a bundle of birch twigs before carrying them off to his forest lair. Oh, the injustice! Henceforth, I unilaterally declare that any company whose ads don't mention the Krampus just as often as Santa is "naughty" and therefore utterly inimical to the holiday. Here's the list so far:

Hmm, looks like I'd better start an intense pressure campaign to force stores across the country to start plastering the Krampus all over their circulars and commercials. After all, if everyone else doesn't pay lip service to my red-faced demands, the moral fabric of the very country could totally unravel!

...No, wait...it turns out that the important thing about the holidays is being with friends and family and strengthening our interpersonal bonds through shared traditions instead of obsessing over the language in freakin' commercials.

_____
1.) I spent the vast majority of October sprawled out like a dragon atop a huge pile of horror movies and KitKats, so I guess I shouldn't really throw stones about how other folks spend their free time...

Posted by Skippy the Skeptic at 1:22 AM

Actually they got the JC Penny thing kind of covered with their disclaimer:
This list only reflects a company's "Christmas" advertising and does not take into account other corporate policies AFA may not agree with.

So they can be Christmas "nice", but still not really "nice." Yeah, Victoria's Secret is out of luck either way...

completely unrelated to what you're talking about, but I thought you might find this interesting/have an opinion about this.

Fox, there was a story on NPR about the very same thing recently. I have to say that I don't feel much sympathy for army chaplains who are afraid that their fiery sermonized might be marginalized by encroaching reality.