In December of 2008, I made a post discussing a passage from a 2006 state law that listed the one of the duties of the Kentucky Office of Homeland Security as

...stressing the dependence on Almighty God as being vital to the security of the Commonwealth...and prominently displaying a permanent plaque at the entrance to the state's Emergency Operations Center stating the text of KRS 39A.285(3).

For the record, KRS 29A.285(3), passed in 2002, states in part that "safety and security of the Commonwealth cannot be achieved apart from reliance upon Almighty God", then contains a biblical quote. Taken together, these two laws seem to indicate that our Homeland Security force is meant to look a little something like this: 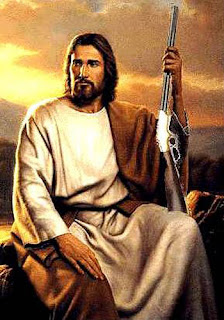 In Kentucky, Jesus doesn't just enforce the law;
He IS the law.
American Atheists sued to have this language removed in 2008, and in 2009 the Franklin Circuit Court rather sensibly ruled that the laws represented the establishment of a government religion. Because both the U.S. and Kentucky Constitutions specifically forbid the establishment of official government religions, the wording of the laws would have to go. Seems to me that it's a pretty cut and dry situation.

Alas, it's an election year. Our Democratic State Attorney General, Jack Conway, is in the midst of a nigh-unwinnable senatorial campaign against Tea Party darling Rand Paul. Call me cynical, but Conway's decision to appeal the 2009 ruling and take the case to the Kentucky Court of Appeals seems, I dunno, like maybe it's just one big of political theater. In fact, not only is this political theater, it's a bona fide legislative tragedy complete with a Greek chorus - 96 out of 100 Kentucky state representatives and 35 out of 38 state senators have filed a pair of briefs with the court in favor of keeping the religious language. This is the south after all, so a little genuflection at the feet of the religious folks is expected near election day.

Ultimately I suspect this matter will probably drag on for at least a couple more years and will probably move on to bigger and better arenas than just the Kentucky Court of Appeals. In the meantime, maybe Kentuckians should be just a little worried that only 7 people in our entire state legislature care one iota about not just the U.S. Constitution, but also about the laws of our own state.
Posted by Skippy the Skeptic at 3:11 PM

the WORLD TRADE CENTER PROPHECY - THE DANCE OF DEATH


the ungrateful bastards full of hubris...


a bullet for your head, traitor

And finally, the *only* man in Minnesota who says there is no God has suddenly become an arbiter on mental health...

COME SEE A PHOTO OF MABUS AND AN EXPLANATION OF IT!

Hey Dennis. Saw your picture over on PZ's blog the other day.