Passing the Glove: My thoughts on the new Freddy Krueger

(This is a marked departure from my usual fare, but the Nightmare on Elm Street films are near and dear to me. Replacing Robert Englund with Jackie Earle Haley as Freddy Krueger is a seismic shift for the franchise, so I wanted to give my perspective as a fan on the new Freddy Krueger.) 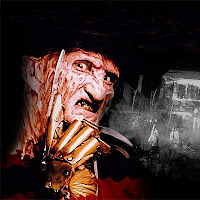 Nightmare on Elm Street was released in 1984, when I was two years old. Nightmare revolutionized what had by then become known as slasher films by introducing Freddy Krueger, a reality-warping supernatural madman, to a genre that had, to that point, been dominated by more realistic killers like Jason Voorhees and Michael Myers.1 And holy shit was Freddy scary. He wasn't just some serial killer out to get you. Oh no, serial murder was old hat for Freddy - he'd already been the Springwood Slasher, a child-killer who met his end at the vengeful hands of his victims' parents. Now he was the world's most pissed off ghost, and he'd get you where you were most vulnerable - your dreams. In the dreamworld there were no rules and Freddy had no vulnerabilities - The sky was the limit as far as the macabre tortures Freddy would invent to terrorize his helpless prey.

Fast forward to the year 2010. Freddy Krueger has become a cultural icon, starring in a grand total of seven Nightmare on Elm Street films, a TV series, and feature-length battle royal with fellow slasher Jason Voorhees. The movies have grossed more than $330 million worldwide, and you can get Nightmare toys, t-shirts, even video games. A Nightmare on Elm Street has become one of the most successful horror franchises of all time, and it's all thanks to Robert Englund's sneering, sadistic portrayal of Freddy Kruger.

Unlike most of the other slasher characters, who generally remained silent and hidden behind expressionless masks, Freddy had a distinct personality and constantly engaged in banter with his would-be victims. Eventually he even became a vehicle for cultural commentary, and many of the later Nightmare films were thick with pop culture references and self-aware one liners. Also unlike Jason Voorhees and Michael Myers (Of Friday the 13th and Halloween fame, respectively), who were portrayed by many different actors, Freddy was always portrayed by Robert Englund. It's the role that made Englund famous, and in the minds of many fans the character and the actor are inextricably linked. 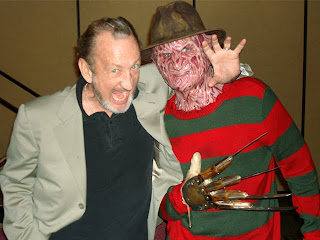 Robert Englund and Freddy Krueger - BFFs
This identification of the actor with the character was responsible for much wailing and gnashing of teeth a year or so ago when it was announced that Englund would not be returning to the role in the then-rumored remake of Nightmare. Fans wondered who, if anyone, could possibly replace Englund, especially in the wake of the recent slew of unimpressive remakes of other 1980s horror films. Even after it was announced that Watchmen's Jackie Earle Haley would be playing Krueger, a lot of folks, myself included, still wrote the remake off as a lost cause. For me it was nearly a personal matter - Nightmare on Elm Street was the first true horror movie I ever saw, and more than any other single film it was responsible for my lifelong love affair with the genre. It also scared the holy hell out of me as a child. Remaking it at all, and then not casting Robert Englund as Freddy, seemed like a huge middle finger to the original.


Well, I saw the new Nightmare on Elm Street over the weekend, and despite the complaints I have about the movie itself, I have to admit that Jackie Earle Haley makes a pretty freakin' good Freddy Krueger. In regards to the film, the pacing is off, there's too much of a rush to establish the "rules" of the movie as quickly as possible, and the alleged plot twist is dealt with so ham-handedly as to be unconvincing. Regarding Freddy, I really have no complaints. Going into the film, I had two fears about Haley's version of Krueger - That he was going to be so different from the original that it may as well be a different character, or, conversely, that Haley would be playing Englund playing Freddy. I'm delighted to say that neither is the case. 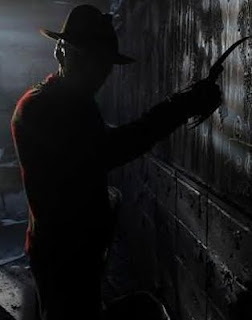 Haley's Krueger is different from Englund's, but it fits in nicely with the new backstory for the character. Englund's Freddy, having once been the Springwood Slasher, is a serial killer who suddenly finds himself constrained only by his own diabolical imagination. Think about that for a second. What would someone like Ted Bundy have been like if he suddenly found himself wielding nearly unlimited power? It's a chilling concept. Englund's sneering, gloating, but ultimately cowardly portrayal of Krueger in the original series fits perfectly with that origin for the character - he's a murdering sociopath who gets to play by his own rules...and he's relishing every second of it.

Haley's Freddy has an altogether different motivation - He was no murderer in life, but in death he's out for revenge. He still torments his victims, gloating over them and taking pleasure in their fear, but he's got a harder edge than Englund's Krueger. You get the feeling that he's not terrorizing his prey because it's fun, or at least not just because he's having fun. He feels like he's justified in what he's doing. He not just killing people, he's punishing them for what they did to him. Think of it this way: Have you ever been so mad at someone that - just for a second- a horrible revenge fantasy flashed through your mind? Haley's Freddy is acting out those fantasies, and the results are viscerally frightening. He's going to kill you, he's going to do it painfully, and as far as he's concerned you deserve it.

The new Nightmare on Elm Street is a flawed movie in many ways, but it's not because of the new Freddy. If anything, Jackie Haley's performance hearkens back to the original Nightmare in a way we haven't seen in years. In the last few films, Englund's portrayal of Freddy had lapsed into the realm of comedy. That's fine, especially if you look that the later films in the series (especially parts 5 & 6) as works of self-parody, but Freddy is based on such a terrifying concept - an inescapable supernatural evil that can turn your very dreams against you - that the franchise has frankly been begging for a more serious treatment.

I don't necessarily know that I want this remake to spawn a new line of sequels, but Jackie Earle Haley gets my stamp of approval as the new Freddy Krueger. He's succeeded in making Freddy scary again, and I think it's safe to say that he's more than worthy of wearing The Glove.

_____
1.) There had already been something like six Friday the 13th films and three Halloween movies by the time Nightmare was released, but the antagonists of those franchises were still for the most part being presented as living madmen. (Jason, for example, was not clearly shown to be a zombie until Friday the 13th VI. Until then he may have been just a ridiculously durable lunatic.)

Posted by Skippy the Skeptic at 5:30 PM