Stop me if you've heard this one: Around this time last year, a couple of pranksters convinced the self-proclaimed "world's greatest Bigfoot hunter" Tom Biscardi that they had slayed a Sasquatch and had its carcass preserved in a deep freezer.1 Ever the trusting soul, Biscardi hacked up an undisclosed (apparently large) sum of money to buy the corpse and called a huge press conference touting the "discovery" before actually bothering to examine it. Then, to absolutely no one's surprise but Biscardi's, the "corpse" proved to be a Halloween costume stuffed with animal entrails and the hoaxers disappeared with his cash.

So why the history lesson?

Well, Biscardi's back. This time he claims to have a Sasquatch toenail that he got from a guy named Larry Jenkins out in Arizona. Call me a cynic, but after the corpse thing last year and the Bigfoot webcam fiasco in 2005, he'd better have some damned convincing evidence this time.2 Luckily the toenail has already been put through a battery of tests in an attempt to determine its origins. Even more luckily, Search For Bigfoot has an article up breathlessly describing the toenail and detailing an exchange between one of Biscardi's associates (referred to as "SL") and a nameless researcher from an unknown university who secretly ran the genetic tests on the nail.

Wait a second. Nameless researcher? Unknown university? Secret testing? That sounds more than a little sketchy, but for now we'll that slide and get to the meat of the matter: What did all these tests say? Unfortunately the article on the tests is a bit convoluted - Two Bigfoot hunters are writing about what was reported to them by this SL person, who was in contact with the folks from the mysterious University. Still, here's what was said about the magic toenail:

From the "1st response to SL from the university": The primate part seems to be right, but not the non-human part...it came back 99% homo sapien or human...

The original email from SL to the researcher doing the testing isn't posted, but the wording of the response is telling. I rather suspect the first e-mail from the Bigfoot folks might have gone a little something like "We found a nail that we think came from a non-human primate". Thus, the reply of "The primate part seems to be right, but not the non-human part..." seems to mean that "you're right that it's a primate nail, but not that it's non-human." I can't know that for sure, but that's certainly how it looks to me.

The SFB folks seem to read it differently, though: They assert that it means that the nail has 99% human DNA but 1% "non-human DNA". That's an odd reading of the text, and from it inexorably comes a leap of logic from the Bigfoot folks: "How many creatures are walking around the North American forest with 99% human DNA and 1% unknown primate? What else could it be..."

My interpretation and the SFB interpretation couldn't be more different. One means that Biscardi has once again been played for a sap, this time by a dude who mailed him a nasty old toenail, while the other means that (holy shit!) Bigfoot is real. It seems we're at a loggerheads. If only there was some kind of clarification available so we'd know what the 99% bit meant. Oh wait, there is:

From "the next correspondence from the University": What the 99% means is that we are confident to that percentage that it is human...

That seems pretty open-and-shut, but the folks at Search For Bigfoot seem to have been reading different e-mails than the ones that they posted on their site. They claim towards the end of the article that "they [the researchers] have told us that the DNA and the physical properties of the nail indicate that it is not human." 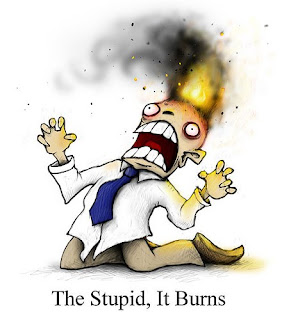 The researchers said that they're 99% certain the nail is human! The genetic material taken from the nail, as well as its morphology compared to the nails of known non-human primates, led them to conclude that "it was likely of human origins". The lab itself, at least according to the e-mails posted, never says that the DNA is "99% human, 1% non-human". That was flatly made up by the Bigfoot hunters because, to all appearances, they can't freakin' read. They've somehow twisted "We're 99% sure it's human" into "it's 99% human and 1% monster". Amazing! Even more amazingly, the author of the article then tries to end with a zinger:

I guess "science" doesn't mean that much to scientists if it makes them question the work they've done in the past.

I think a better wrap-up would be that science doesn't mean that much to Sasquatch hunters with low reading comprehension.
1.) Remember?
2.) Take a look at the title of the article linked here. Apparently even the Bigfoot Field Researchers Organization thinks of Tom as a "notorious huckster".
3.) Italics mine.
Posted by Skippy the Skeptic at 8:36 PM

The only one being taken for a sap is anyone who believes that Tom Biscardi was. Biscardi is a known hoaxster, and this is his third hoax attempt concerning bigfoot. Anyone who thinks he wasn't in on that squatch corpse or the toenail hoax from the word go is deluded. It's almost like he has some pathological neurosis that tells him people will still buy his next scam. Oh wait, you did...

Yeah, I totally fell for Biscardi's Bigfoot carcass and magic toenail by calling bullshit on them from the very beginning.