I haven't been hanging out over at Above Top Secret lately because, well, I have better things to do. I took a mosey that way this evening in the hopes of finding something amusing and was glad to see that the conspiracy buffs didn't let me down. Check out this gem of a thread. Basically someone dredged up a photo of Barack Obama flashing the American Sign Language sign for "love", realized that he'd seen other people flashing that sign before, and decided to file it as a conspiracy under ATS's "New World Order" forum. The topic starter notes that the same hand sign is popular among heavy metal enthusiasts as a "devil sign", and from there seems to veer off into the good old realm of "global Satanic conspiracy." (Deliciously, the topic starter cites a page of crazy old Jesus Is Savior to show that the gesture is Satanic.) 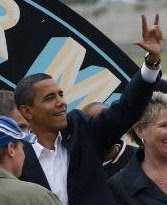 Where have I seen that hand sign before...?
A few other posters noted that Obama's gesture is just regular ASL, to which the topic starter replied "unless you personally happen to know why someone used it in a particular instance - it could have meant any of it's different meanings." No Occam's Razor for this fellow - if it might be an evil conspiracy, then it must be an evil conspiracy.

I'll tell you what though, the whole "conspiracy of devil worshippers" bit is getting tired. I propose that if we must have a conspiracy to go with this picture, then it should at least be a little more original. Let's pretend that perhaps the president elect does have a secret...an alternate identity perhaps, one that no one else knows about. Perhaps someone who's occassionally on the wrong side of law, someone who tries to do thing his way. It would would have to be someone with an athletic build...someone who was born in the early 1960s...someone with a propensity for hand gestures. Wait a minute... 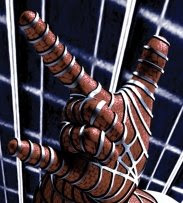 Holy crap...
Yeah, that's right. Barack Obama is clearly Spider-Man. You read it here first. I mean sure, there are other interpretations of that gesture, but since we don't know the context in which that photo of Obama was taken we may as well infer that it he was getting ready to shoot webs at the Green Goblin. Who's to say?

Although, it wouldn't be the first time Spider-Man has hired someone to impersonate him (I'm looking at you, Prowler).