Yes Virginia, There is a Great Pumpkin...

It was pumpkin carvin' time around here last night, which frankly is one of my favorite fall activities. In spite of the fact that I'm not that great at it, I sneakily like to think of myself of a bit of a pumpkin artiste and I usually hack up several of the things over the course of any given October. This year I had only two to mess with, since the girlfriend lay claim to one of the three I brought home the other night, and while I'm pretty happy with them, they're not my best work.* But all that's neither here nor there: I don't want to talk about just any pumpkin, I was want to talk about The Great Pumpkin.

There were two main Halloween specials when I was growing up, Garfield's Halloween Adventure, and It's The Great Pumpkin, Charlie Brown. The Garfield special hasn't run regularly since I was a kid, but The Great Pumpkin ran last night, around the same time I was sitting down to gut my own soon-to-be jack'o'lanterns. If you've somehow never seen it, it's about how Charlie Brown's friend Linus spends all of Halloween night standing in an isolated pumpkin patch waiting for "The Great Pumpkin" to appear and reward him for the sincerity of his beliefs. Ultimately the Great Pumpkin never shows up and Linus is very literally left out in the cold - He's missed out on Halloween completely and even convinced his friend Sally to do the same thing, turning their backs on their friends in favor of a make believe figure that never shows itself. 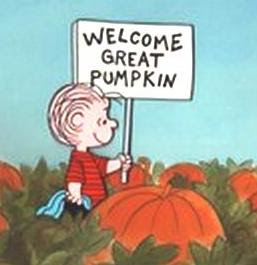 The one thing that bothers me is that whenever I drive past a church, lurk on the forums of a UFO cult, or sit through another stupid 2012 "documentary" I realize that there are an awful lot of people out there still waiting for the Great Pumpkin...


*For those of you who are wondering, I consider my best work to be my FrankenPumkpin, circa 2000. I even jammed bolts into the thing to carry the Frankenstein gimmick a little further. It was a thing of beauty...
Posted by Skippy the Skeptic at 6:26 PM