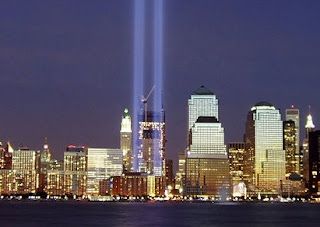 I'm sitting here watching footage of the September 11th attacks on the History Channel. I'd honestly rather not, but it feels somehow necessary. Not just to pay my respects to the memories of the nearly 3,000 innocents who died that day, but to remind myself of the capacity for utter, unsensing evil that people are capable of when properly motivated. Not just evil, but evil done with sick, sneering certainty that it's actually somehow good, justified, holy.

I'm not trying to turn this in to some sort of macabre, crass "I told you so" moment - Regardless of how snide and snarky I may sometimes come off as on here, that sort of sneering sanctimony isn't my way. At the same time, I hope my theist readers understand how atheists feel about what happened on this day seven years ago. Watching the footage of the terrorist attacks, and especially footage taken in the hours after the impacts on the World Trade Center, gives us a glimpse of religiously motivated evil wholly free of abstractions. It shows us the reality of such horror - not just the facts of it, not just the number of dead written down on a page, but the reality of the suffering - as experienced by real human beings with friends and families - that such evil brings. It is fundamentalism with the pious mask torn off, revealing its glaring reptilian face to the world.

"Believe as I do. Pretend to believe as I do," it sneers. " Show me 'respect', leave me unquestioned, allow me my sacred 'divinely revealed' beliefs with no challenges at all. Or I will kill you. I will kill you and smile, for my god told me to do it."

While the September 11th attacks were perpetrated by sickminded Islamic zealots, unyielding, unthinking fundamentalism isn't unique to Islam. The long-running civil unrest in Ireland shows us exactly what Christian fundamentalists are capable of. The brutal goings on in the disputed territories surrounding Israel reveal to us the terrible capacities of Jewish fundamentalism -fueled though it is by it's Islamic counterpart - as well. So-called "state religions" - cults of personality built up around "infalliable" national leaders or nationalistic mythologies sprung up from heroicized histories - these too are capable of spawning unspeakable cruelty. September 11th brought this into the light for everyone to look upon. Seven years later, without shock to numb us to what we are seeing, the images before us are even starker.

All of this is what atheists, or at least this atheist, see when we look back on September 11th, 2001 - the smirking face of privileged, pious insanity.

I don't have some snappy closer here. There's nothing witty or glib to say about it. Almost 3,000 innocent people lost their lives that day. That number would no doubt have been much higher if not for the selfless heroics and bravery of the untold scores of rescue workers and private citizens who, looking into the face of barbarism incarnate, found reserves of altruism within themselves that they probably never dreamt of. That gives me some hope that the human capacity for selfish, thoughtless evil is nevertheless exceeded by the capacity for selfless, uncynical good.
Posted by Skippy the Skeptic at 9:37 PM