I'm swapping out my skeptic hat for my political scientist one to bring up an interesting note from North Korea: Kim Jong-Il didn't make an appearance at the big Founder's Day military parade today. In fact, he hasn't been around for a couple of weeks now. Why's that important? Well, Kim Jong-Il has been the "dear leader" of North Korea ever since his daddy kicked in 1994, and since he's the head of basically every state apparatus he usually doesn't keep a low profile. Missing the gigantic military parade on his country's equivalent of Independence Day is totally unlike him.

So what does that mean? 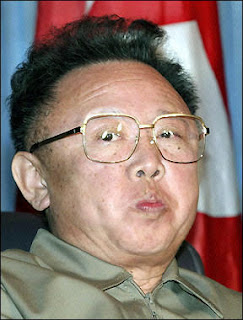 Kim Jong-Il, shown here trying to eat an entire pack of Shock Tarts at once.

Well, the U.S. intelligence community is currently pursuing rumors that Kim Jong-Il has had some kind of catastrophic health event, possibly a stroke, at some point in the last few weeks. It may even be the case that he is no longer functionally in control of the government - Anyone who follows international politics will no doubt have noticed that North Korea recently reversed itself on the dismantling of the Yongbyon nuclear reactor. Given that North Korea's military higher-ups were generally opposed to the six-party talks about North Korea's nuclear disarmament*, there's a fair amount of circumstantial evidence to suggest that perhaps Kim Jong-Il is out of action and some of his generals are at least temporarily running the show. (This is somewhat bolstered by the fact that his two eldest sons are apparently utter smacktards. Since the People's Army is the most powerful political entity in the country, if Kim Jong-Il's successor isn't family, it will almost certainly be someone within the armed forces.)

This is an interesting and potentially troubling situation, since if Kim Jong-Il is really dead or dying, the power vacuum caused by his passing could cause a struggle for control within the People's Army that could potentially destabilize the state. Not only would such a situation have adverse effects on both South Korea and China (mostly in the form of a potential tide of refugees), but it could also mean that North Korea's nuclear resources might very literally be up for grabs.

Keep watching the news on this one, folks. Something important may be happening.

*Some North Korean History Cliff Notes: North Korea's economy sucked to begin with and was utterly devastated by a series of natural disasters in the 1990s that left the country unable to support itself. China has spent the last couple of decades propping up the regime as, essentially, a buffer state between themselves and the U.S. forces in South Korea (and because a mass migration of North Koreans into China in the event of the collapse of the North Korean state would be a pain in the ass for the Chinese) but has increasingly come to view that arrangement as something of an albatross. There's some talk among international observers that North Korea's pursuit of nuclear weapons may have been something along the lines of an attempt to bully food aid out of other countries - Basically a weird attempt at backhanded begging while still salvaging national pride. It is apparently the case that certain honchos in the People's Army are unable with this arrangement and have been pushing for a more legitimately hawkish approach to be taken.
Posted by Skippy the Skeptic at 8:28 PM