Par for the Course...

Tattooed "faith-healer" and scam artist Todd Bentley has announced that he's temporarily suspending his ministry because...wait for it...he got busted cheating on his wife with one of his staff. That sounds familiar. Bentley's organization, Fresh Fire Ministries, announced today that "the enemy has found a way into our camp" and that Bentley will be stepping down from his position on the Board of Directors and will be canceling all of his ministry activities for at least the rest of "the season". (Not exactly sure what they mean by that, honestly.) Bentley's thralls have been assured that "there has been no sexual immorality"* but that Bentley "entered into an unhealthy relationship on an emotional level with a female member of his staff". That peculiar choice of wording amuses me a little, because "unhealthy emotional relationships" don't generally result in terrible marital strife and the suspension of a lucrative ministry movement. I'm forced to wonder if they simply don't want to own up to Bentley engaging in extramarital humping. 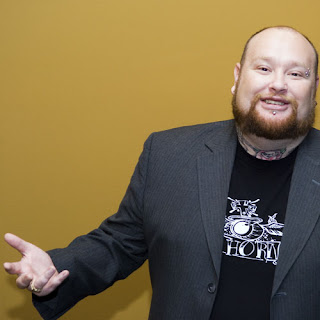 Child molester Todd Bentley is taking a break from preaching.
The rest of the announcement basically boiled down to "stop asking questions and keep sending money." Weirdly, however, mention is also made of Fresh Fire Ministries' "Supernatural Training Centre". Apparently this is a program through which Bentley and his lieutenants teach other folks all of their magical powers. This is in reference to the "charismatic gifts", aka magical X-Men powers, that Pentecostals claim that Yahweh bestows on the most sycophantic of his followers, but according to the STC these gifts can brought out through spiritual "impartation" by Bentley and his goons for the lowly price of $3,600 tuition, $1,500 for a mission trip, and $450 a month as a dormitory fee. Oh, and a $50 application fee. Bentley claims to have raised almost two dozen people from the dead, so perhaps that's meant to be a bargain price, but considering the cost it should come as no surprise that the application fee includes a financial disclosure form. (Carrying the X-Men joke a little further, the SYC promotional material continually references one's DNA - Divine Nature Activated.)

Luckily for Bentley and disturbingly for the rest of the world, the faithful have tended to have short memories when it comes to this kind of scandal. Precedent indicates that we have every reason to expect Bentley to be back to his huckster ways in no time.

Thanks to reader Jak for bringing this to my attention.

*Except for that little boy Bentley molested when he was a teenager, of course. Jesus gave him a mulligan on that one.
Posted by Skippy the Skeptic at 5:26 PM

"The enemy" made him due it. Bloody priceless. Not only do they want to ignore the specific nature of his issue (and I'd argue that a human being behaving like a human being isn't an issue...), but they seek to absolve him of responsibility for it by laying the blame at the feet of "the enemy". Honestly. The logic of that basically says that we are just cosmic muppets being manipulated by God and/or Satan for their whimsical purposes. If it's all out of our control anyway, the whole exercise of praying, going to church, reading the Bible and such just seems like so much wasted effort. Yet clowns like Bentley prosper off of people who think that his particular brand of snake oil gives them the inside track. Is it all laid out or isn't it?

Now, regarding his claims of raising the dead. Surely he can produce some empirical evidence of this...

It's weird to me to see adults who are perfectly willing to put forth the excuse of "the devil made me do it" instead of taking responsibility for themselves. By the time I was in kindergarten I'd already been taught that stuff like that wouldn't fly.