Seeing What We Want To See..

Florida hospital-goers were amazed when an image of Marvel Comics superhero Dr. Strange appeared on a window at the Florida Hospital Medical Complex in Orlando, prompting a series of phone calls and e-mails to the hospital. Dr. Strange, also known as the Sorcerer Supreme, is most widely known for destroying all of the vampires in the world in 1983 by means of the mystical "Montesi Formula". Hospital patrons took photos and video of the event before the image went away. Many of them stated that simply seeing the heroic neurosurgeon-turned-wizard made them feel as if they were being watched over and protected during their time in the hospital. 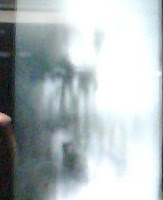 Strangely, a news report has been circulating here erroneously reporting this to be an apparition of the Christian religious figure Jesus Christ.
Posted by Skippy the Skeptic at 11:43 AM

Are you sure it's not David Blaine?

Upon further review it could also be Sean Connery.