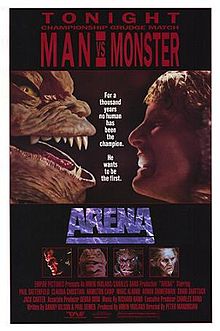 In the late 1980s a subgenre of martial flick that I’ll call “fighting tournament” movies sprang into being.  They tend to follow a pretty stock formula: there’s a shady organization holding organized martial arts bouts, the hero becomes involved - usually out of the need for money to save a family dojo or because of one his friends got hurt/killed competing, the hero trains or has already been trained in an “old style”, then comes in and beats the bad guy.  You get bonus points if the hero has a buddy who’s also tough enough to beat the bad guy but gets crippled/killed due to some kind of chicanery.


“You’re exaggerating, Skippy”, I can hear you say.  “I bet you can’t name ten movies with that plot without naming any sequels or the movie we’re talking about today.”

Kickboxer, Bloodsport, Bloodfist, No Holds Barred, Lionheart, The Best of the Best, The Quest, Ring of Steel, Circle Man (aka Last Man Standing), and No Retreat, No Surrender.

“Okay, but you’ll never be able to name 7 more recent ones.”

The Circuit, Redbelt, Damage, Never Back Down, Ring of Death, Ong Bak: The Thai Warrior, and Man of Thai Chi.

Now that I have that out of my system, today we’re going to talk about Arena - Yet another fighting tournament movie from the late 1980s.  This time the hook is that all the action takes place aboard an orbiting space city and that most of the fighters are special effects-laden spacemen.  Like American Samurai, this movie is near and dear to me, as it was a staple of my HBO-watching youth.  I recently got a copy of it in a “Sci-Fi Movie Marathon” set put out by Shout Factory, and I could barely wait to get it into my DVD player.


The film opens on a montage of spaceships coasting by the camera as viewers hear isolated snippets of commentary from a prizefight being broadcast in English and in alien languages.  Apparently everyone in space is watching the bout we’re about to see.  Finally the camera settles on a space station and we find ourselves in an Arena (Ding-ding!  We have a title, people!) as two bizarre aliens duke it out.  In one corner is Spinner, a weird robotic lizard that looks like Admiral Akbar cosplaying R2-D2.  His opponent is Horn, the evil champion of the Arena.  Half-minotaur, half-Robocop, and all foam rubber, Horn looks like something out of The Guyver and constantly emotes through his arms like a Power Rangers monster.

In the Arena, fights are kept competitive using a machine called the Handicapper, which can decrease the speed and strength of a physically superior combatant to ensure that bouts are won or lost on skill alone.  (We learn this because ring announcer reminds the crowd of this in the middle of the fight, presumably for the benefit of those of us joining the event already in progress.)  Horn, however, is able to bypass the Handicapper by way of stealthily delivered steroid injections from his corner men in between rounds.  Aided by his anabolic pick-me-up, Horn runs through Spinner, literally ripping his arm and taking it with him when the fight’s over.

Meanwhile, ultra-buff short-order cook Steve Armstrong is forced to intervene when an argument between his four-armed boss Shorty and an angry Arena fighter becomes physical.  Steve saves Shorty and beats up the alien fighter, but causes so much ruckus in doing so that Shorty’s restaurant is permanently shut down by the space authorities.  Shorty, played by Hamilton Camp1 and dressed liked Frodo Baggins, isn’t too bummed about losing his business, and even brings Steve home with him after Steve’s landlord kicks him out.

In any event, we learn that Steve was a prizefighter on Earth and that he came to space to fight in the Arena.  However, since Earthlings are so fleshy and soft compared to robot minotaurs, human fighters simply can’t compete in the Arena. (This despite the fact that the Handicapper exists for this specific purpose and is already used in every fight.)  Now Steve just wants to go back to Earth, but while trying to get money for his space shuttle ticket, he and Shorty end up in hot water with Rogor, a crime boss who also happens to manage Horn.

With Shorty held hostage, Steve is forced to compete in an Arena bout.  Managed by the plucky female trainer Quinn2, Steve must fistfight Sloth, a gigantic cricket-slug who is also easily the best special effect in the movie. We’re about 45 minutes into the movie at this point, but things are about to really pick up.  Or are they?  It’s at this point that my childhood memories of this film deviate vastly from reality.  For, you see, child Skippy believed the fight scenes in this movie to be amazing.

It’s kind of amazing, in some sense of the word, to see Steve Armstrong in his fight wear: A piecemeal mix of Tae Kwon Do sparring gear, shoulder pads held on by a glistening gold man-bra, and a gigantic sculpted codpiece worn atop a shiny gold speedo.  (Seriously, someone had to design that costume, someone had to make it, and the Paul Satterfield had to put it on.  There were multiple stages in that process where somebody could have stepped in.)  However, the actual fight between Armstrong and Sloth is sub-Walker, Texas Ranger quality.  It’s mostly flailing and the occasional front kick, but luckily the camera’s cutting around so much we can’t really see it anyway.  The Sloth puppet/costume isn't exceptionally mobile - at one point Steve has to grab Sloth's arm and put it around his own neck so Sloth can "choke" him.

As you might have guessed, Steve wins the day and eventually works his way to a title match with Horn.  As you might have further guessed, the bad guys sabotage the Handicapper to put Steve at a disadvantage.  And as you might have finally guessed, Steve still wins the day, proving that humans are awesome and that if you try hard enough you can punch out a 7-foot alien bull-man with a half-robotic body…even if you’re being shot with a strength-sapping laser and only hours ago you were near-fatally poisoned in a scene Skippy didn’t bother to mention.

It’s a leverage thing, mostly.  And chi.  You gotta have chi.

In any event, it’s hard for me to honestly judge this movie.  The fight scenes, this film’s selling point to me as a kid, are actually pretty bad.  However, the sheer amount of effort that obviously went into Arena is still sort of impressive.  The cast isn't an A-list roll call by any stretch of the imagination, but it’s not filled with throwaway actors.  The acting’s not terrible considering the material, but some of the plot devices are pretty laughable.  Notably, almost everyone in the movie is a special effect, since only a couple of characters are plain ol’ humans.  Granted, some off the aliens are just wearing Halloween masks and bodysuits, but you get the idea.

The only full fights you see with Armstrong are the bouts with Sloth and Horn, but clips of several others are shown in a montage, meaning that a number of elaborate monster suits were made for just a few seconds of footage.  Heck, at one point we see Armstrong sparring with a big lobster-lizard in the gym – He’s a pretty good effect that obviously took some work to pull off, but he’s around for all of 3 minutes.  I can't help but wonder if they filmed a bunch of bouts, realized they looked awful, an the pared the fighting down to a bare minimum in editing

Overall, Arena isn’t amazing, but it still might be worth a look if you’re interested in a semi-brainless sci-fi flick with some martial arts elements.  If that sounds up your alley, then you should check it out.
_________________
1.) The voice of Gizmoduck from Duck Tales.
2.) Played by Babylon 5  stalwart and prolific voice actress Claudia Christian.
Posted by Skippy the Skeptic at 10:54 PM

Is that based on the Fredric Brown story that was made into a Star Trek episode?