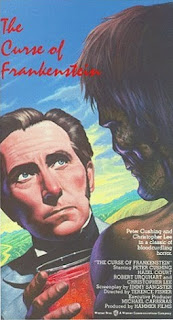 I'm kicking off my Halloween Horror Countdown starts with Curse of Frankenstein, the film that launched the legendary Hammer horror series.  Released in 1957, this wasn’t your grandpa’s Frankenstein flick.  Filmed in full color and chock full of that oh-so-enticing combination of cleavage and bloody on-screen mayhem, Curse of Frankenstein was wildly popular with audiences and marked a sea change in the horror genre, laying the groundwork for the more raw, graphic horror films that would appear in the coming decades.  It also marked of a change from the conventions of prior Frankenstein movies by taking the bold step of, well, actually being about Frankenstein.

If I were to ask you to picture Frankenstein, odds are that you’d envision Boris Karloff in the iconic makeup from the 1931 Universal classic.  That’s a great freakin’ movie…but of course you’d be thinking about the monster, not the actual Dr. Frankenstein played by Colin Clive.  That’s the problem with a lot of Frankenstein films – They’re all about the monster.  Dr. Frankenstein himself may or may not get a lot of screen time, but all too frequently he doesn’t have that much character.  Often he’s just a generic mad scientist whose only purpose is to move the plot along until the monster is ready to come out and stomp around.

Not so with Curse of Frankenstein.  Peter Cushing’s Victor Frankenstein is may be one of the best film anti-heroes ever.  Not a simple mad scientist, Cushing’s Frankenstein is a man of high ideals, a man whose life’s work is driven by the desire to revolutionize surgical procedures and save lives.  Unfortunately he’s also a coldly pragmatic man with a self-serving streak.  His initial successes with the revivification of dead tissue alongside his erstwhile tutor and research partner Paul Krempe spur him on to ever more wildly ambitious experiments…and you know the rest.

Okay, so that’s a pretty generic Frankenstein narrative, but Curse of Frankenstein allows us to spend plenty of time with Dr. Frankenstein both in and out of the laboratory and to really see his personality.  Frankenstein is so blinded by the shining light of the good he might accomplish that he is completely unable to process of the horror of what he’s actually doing.  He’s so bizarrely nonchalant about his gory surgical experiments that it’s creepily funny.  Early in the film he and Paul steal a burly corpse in the hopes of reanimating it, only to find that the head has been mutilated by scavenging birds.  Nonplussed, Frankenstein saws the head off and tosses it into a vat of acid, then without missing a beat asks his friend if he’s ready for lunch.

For 1957, the film is pretty gruesome.  Midway through the film, Frankenstein sets out to find a suitable brain for his creature.  Rather than steal one from the cemetery, he simply invites the elderly Professor Bernstein over for dinner…then hurls him to his death by shoving him headfirst through a second-floor railing.  I bet that scene alone knocked viewers in 1957 on their collective asses.  To put things in context, this was the same year that Old Yeller and Jailhouse Rock came out, and yet here we have an old man getting spiked onto his head on camera.  Not long after, the monster itself takes a bullet to eye complete with a spray of candy-red blood.  Times were definitely changing.

Of course, you can’t talk about a Frankenstein movie without discussing the monster.  The Creature in this film is played by Christopher Lee, soon to be of Horror of Dracula fame.  Wholly unlike the box-headed Creature from the 1931 film, this monster far more zombie-like.  Asymmetrical, covered with livid scars, and sporting one grotesquely milky eye, this monster is completely unsympathetic.  The Creature’s brain, damaged before implantation during an argument between Frankenstein and Paul (and presumably also when the old man fell fifteen feet straight onto his head), has no capacity for reason or emotion – a slave to its base instincts, the Creature responds to any unknown situation with aggression.

Despite its murderous streak, Frankenstein can find no fault in his creation.  When Paul Krempe kills the beast with a well-placed rifle shot, Frankenstein is livid with him for having the nerve to interfere with his work when, after all, the monster was just in the midst of a minor strangle-tantrum.  As soon as his friend leaves town, Frankenstein retrieves the monster’s body, fishes out the bullet, and brings it back to life.  After going through the ravages of 19th brain surgery and a second resurrection, the Creature is even more grisly looking and wildly inhuman.

I could gush about this movie all night, but the bottom line is that it’s a damn fine Frankenstein flick that’s worth the attention of any true horror fan. If I'm honest, it was hard to choose between this film and the 1931 Frankenstein when I was setting up this list.  I have a soft spot for black and white horror, but ultimately this movie won out based primarily on how entertaining Peter Cushing's performance is in this film.  In addition to being a great movie, Curse of Frankenstein makes the list because of its fantastic ambiance.  The entire Hammer horror series exemplifies the best combination of pulp sensibilities and Gothic scenery.  It’s as though Mary Shelley’s classic (but, let’s not lie to ourselves, dreadfully arduous to read) novel was mixed with a hearty helping of EC horror comics.  This is a movie that’s best watched on a dreary, overcast fall afternoon, preferably in the gloomiest room available.  It’s not especially scary, but it’s incredibly fun and really gets me in the mood for the season.

The Halloween Horror Countdown is just getting started, so be sure to check back all month long for new movies reviews and, if I'm feeling froggy, some more articles related to the season.  See you soon!
Posted by Skippy the Skeptic at 10:34 PM

The original novel was mainly about th doctor, and he regretted creating the monster. I read it years ago so I don't remember it all but I do remember his sense that it was his responsibility to hunt it down and kill it. Totally the opposite of this film!

Yeah, in the novel he eventually understands that he's let his hubris get the better of him. I never cared much for the book though. I tried to read it as a teenager and found it very clunky. Maybe if I read it now I'd have a better appreciation for it.

Sorry for any glitches with the comments lately, by the way. The spam filter has been flagging a lot of stuff erroneously.