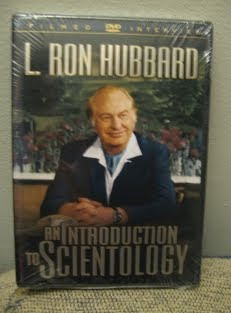 Yeah, that's right, I got my grubby paws on an whacko Scientology DVD for only $2.63 more than it's worth. I found this at a thrift store in Indiana along with a bunch of other Scientology crap, which means that not only did I unearth a veritable treasure trove of nonsense to make fun of examine, but also that someone knew enough to throw all of this flapdoodle away to begin with. The DVD I picked up was also happily unopened (until about 2 minutes ago), meaning it never had the chance to harm anyone impressionable.

In any event, on this disc is an interview with prolific sci-fi author and Scientology creator L. Ron Hubbard that was apparently filmed in 1966. According to the back of the box, this is in fact the only recorded interview in which Hubbard ever took part. I'm going to try a bit of a live-blogging experiment here, typing out my impressions to the interview as it plays.

The first thing I have to say is that the production value of the disc itself is surprisingly high. I guess when John Travolta is paying the bills, you can afford to have animated menus and about two dozen subtitle tracks. For whatever reason, the audio is presented in 5.1 surround sound. Even as I type this, I have the impression of being trapped inside Hubbard's fleshy, gurgling throat as he explains his early life "studying the ways of 21 primitive races." His voice reminds me a bit of Richard Nixon, or maybe Jimmy Stewart if he were chewing an entire pack of gum.

I've paused the interview briefly to add this disc to the Access database I use to organize my DVDs. I'm not quite sure what genre to check off for something title An Introduction to Scientology. I don't have a "documentary" category, so "sci-fi" will have to suffice for now. I may change it to "comedy" later...

I have now have been listening to Hubbard drone on for a little over half an hour. There's not been much substance to Hubbard's statements. Apparently "survive!" is the driving, unifying goal of mankind (fair enough), but since "man is actually a spirit" only Scientology can really help you survive correctly. It's not a medical treatment or in any way akin to psychology (that's true too, but not the way Hubbard intends), but that it's nonetheless "used by medical professionals in different parts of the world" to cure diseases, although that's only an incidental side effect of it's true power. We are further told that folks using Scientology techniques have been proven to have increased IQ scores. By whom? Well,"by the professors of all the universities". Ah, well great...but how does bring about this increase in IQ? "By knowing certain things and then applying them." Clearly.

I'm increasingly amazed about how Hubbard is evading even softball questions by a friendly interviewer. He's actually stumbling over some of these questions, which makes me wonder if he didn't even bother to plan out his responses beforehand. For example, at one point the interviewer asks Hubbard how Scientology has proven that man is actually a spirit. Since Hubbard has said this at least eleven dozen times thus far in the interview, I would have assumed that he'd have some kind of at least slightly coherent reply. My assumption would have been wrong, as evinced by Hubbard's answer:

"Well, the early Greeks, for instance, worked along this line. They wanted to know what man was, and they concluded that he was a spirit clothed in flesh. And, uh, that happens to work out...and so forth."

He shortly thereafter states that Scientology has proved life after death, but that the proof is "too technical for this sort of program".

Right. The interview has finally sputtered to an end, culminating in Hubbard's swelling description of Scientology as a tool for mankind to move forward and better itself. This interview pre-dates Sea Org, so Scientology had not yet become a vehicle for Hubbard to remain at sea for months on end searching for treasured buried during his past lives.

I can't rightly say what it was that I expected out of this DVD, but I had at least hoped that Hubbard would somehow be glib, clever, or impressively conniving in his explanations and justifications of his pseudoscience/religion. He was not. He spent 51 minutes repeating a handful of banal platitudes and answering questions with only tangentially-related vagaries. Rather unsurprisingly, he did not mention body thetans, Xenu, or any of the most fantastical flummery associated with Scientology, but only alluded to the cult as a "path to freedom" and the "betterment of mankind". This doesn't strike me as anything close to convincing, but it's exactly the same flavor of comforting, vaguely mystical, pseudoscientific flummery that cults the world over promote with worrying success.

I don't have a pithy quote to end this post, but I'll leave with one from our pal L. Ron instead. It's far more elucidating than anything he said during his filmed interview.

The disc also came packaged with a a 40-something page booklet containing a biography of Hubbard that truly boggles the mind with its grandiosity. We learn that Hubbard was "a pioneer of American aviation" and a was blinded and lamed during World War II, only to somehow heal himself through sheer force of will. A long discussion of Hubbard's various claims about himself would take an entire book. (Like this one, courtesy of Operation Clambake, a website dedicated to exposing the truth about Scientology.)

I would refer readers to the late Martin Gardner's article on Hubbard and dianetics from his classic Fads and Fallacies in the Name of Science for a brief overview of Hubbard's largely fictional life and times.

Posted by Skippy the Skeptic at 5:55 PM

The worst part about the whole thing is that the video probably shows L. Ron at his most coherent...

Although I've read articles that indicate that Hubbard actually came to believe his own line of nonsense towards the end of his life, I have suspect that at the time this interview was filmed he was still cynically aware that he was spouting complete rubbish.