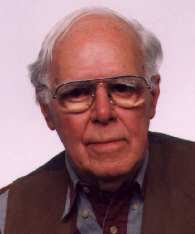 Martin Gardner
1914-2010
Another hero is gone. Martin Gardner, the world's most famous "recreational mathematician" and a titan of critical thinking, passed away Saturday at the age of 95. A true polymath, Gardner was the author of dozens of books and articles about a bamboozling array of subjects ranging from L. Frank Baum to L. Ron Hubbard. His book Fads and Fallacies in the Name of Science, though dated a bit by its specific subject matter (How many folks here in 2010 have ever heard of Alfred Lawson?) is one of the best works on pseudoscience available and has remained in print almost continuously since 1957. If by some chance you've never read any of his work, I heartily recommend the aforementioned Fads and Fallacies, as well as two of his more recent books, Did Adam and Eve Have Navels? and When You Were a Tadpole and I Was a Fish.1

With Martin's passing we've lost not only one of the most articulate proponents of critical thinking, but also perhaps one of the most interesting men on the planet. He'll be sorely missed, but his legacy will live on through his five decades of literary work and the countless lives his writings have touched.