My thoughts on Avatar

Last weekend I finally had a chance to see the new James Cameron flick Avatar. (Perhaps you've heard of it...?) I can honestly say I didn't have much in the way of concrete expectations for the film, not because I though it would suck, but because I just plain couldn't figure out what the heck it was about from the trailers. Maybe I'm just getting old, but the commercials made it look like a video game and didn't do much to motivate me to look online for answers. I ultimately decided to see it for the dual purposes of satisfying my curiosity about the 3D effects and getting in some man-to-man time with my future brother-in-law. (And, coincidentally, avoid going furniture shopping with The Girlfriend's parents.)

As of this writing, Avatar's official box office earnings total somewhere in the area of one and a half a billion freakin' dollars. It's being lauded by some web denizens as the greatest movie ever made, while others have branded it "subtle, dangerous and truly offensive" due to its environmentalist message.1 Other folks...folks who are probably taking the film way too seriously...have started online discussion boards about what "Avatar can teach us" and how to live their lives more like the 12-foot tall, blue, bipedal kitty cats in the movie. In other words, this film has really captured people's attention. Plus it's in 3D. Who doesn't like 3D?

Seemed like it was worth a look, so I dropped $10 a pop for tickets to a 3D matinee showing (and another $4.75 for a freakin' Diet Pepsi) and sat down in the hopes of having my mind blown.

Alas, when the credits rolled three hours later my mind remained sadly unblown...but I wasn't sure why. I'd enjoyed the movie. It was visually stunning, with eye-catching designs and unquestionably the best integration of CGI and live action I'd ever seen. The characters were appealing, the performances were good (especially the Colonel), and the action scenes were exciting.2 Hell, the 3D effects even worked.3 Yet, as I sat there in the theater waiting for the crowd to disperse, I couldn't help but think that even though I'd just seen a good movie - nay, a really good movie - it just wasn't the revolutionary film it was being made out to be.

I'm not exaggerating to say that I spent the next hour trying to figure out why Avatar just didn't resonate with me in the way that I'd hoped. I puzzled and puzzed til my puzzler was sore, but when it finally dawned on me it seemed utterly obvious. Avatar is a really fun film, but it's held back from actually being epic by the utter simplicity of its plot.

If I were to sum up the plot of Avatar in two sentences, it would read thusly: A fella' takes a job with an unsavory corporation devoted to plundering an otherwise pristine wilderness for its resources. Said fella' actually has a heart of gold, and when he finds himself living amongst an isolated people who dwell in the area slated for environmental destruction he begins to have second thoughts about aiding his greedy bosses. 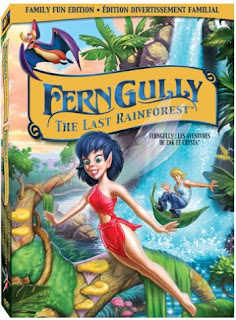 Yeah, that's right: The plot of Avatar is actually the plot of FernGully: The Last Rainforest with a coat of sci-fi painted on. James Cameron's years-in-the-making sci-fi "epic" borrows the bullet points of its plot from an 18-year old cartoon about fairies and talking bats.

Okay, I'll concede that I'm exaggerating a bit, but the fact remains that in Avatar you can tell who's good and who's bad after they've been onscreen for 5 seconds and you can guess the ending about 45 minutes in. For all the complexity of the visual effects, the narrative is almost weirdly simple. Maybe I've seen a few too many movies I know I've seen way too many movies, but I had hoped for at least a tiny wrinkle in the plot of a film that had otherwise been so masterfully produced.

In closing, Avatar is a landmark accomplishment in terms of special effects, and it's certainly worth seeing, but it isn't necessarily the awe-inspiring masterpiece that it's been made out to be. I liked it, I'd watch it again, but I simply can't count myself among the folks claiming that it's the most deeply affecting, poignant film ever made.

_____
1.) Seriously. Check out the comments of the user "Nancy, age 56" on the Christian Answers review of the film. Another user on the same site accuses the film of being "anti-American" even though it takes place in space.

2.) I realize as I'm proofreading this that noting that "the performances are good" reads as a pretty tepid endorsement. I'm too lazy to go back and alter the main body of my text, but I suppose I should amend that by saying that the actors deserve lots of kudos for interacting so naturally with a world that was often almost entirely added in during post production.

3.) Ever seen Friday the 13th Part III? It was originally shown in 3D and featured numerous gimmick shots of crap sticking straight into the camera. Avatar is almost entirely devoid of gimmicky shots like that, and the 3D effects mostly come by way of depth of field. That is to say, rather than looking like something is popping out at you, it looks like you're looking into the background of the film. Color me impressed.
Posted by Skippy the Skeptic at 5:14 PM

Heh. I can kind of see that. Have you actually seen Avatar yet?

Not yet. For reasons I cannot really explain, it just hasn't got my blood racing.

I needed something to bridge the time until Ironman 2.