The History Channel is Really Laying on the Woo...

I was flipping channels last night when, lo and behold, I saw Phil Plait on the History Channel discussing gamma ray bursts. Naturally I stopped to have a look, since Phil's recent book Death From the Skies was 31 delicious flavors of awesome. It's apparently "Armageddon Week" on the History Channel, so I dared to entertain a brief hope that they'd produced an entire show about Death From the Skies. How cool would that be? No such luck. After Phil spoke for a few minutes about what GRBs are and discussed how the earth may well have been in the path of one in the distant past, the narrator solemnly intoned the following howler1: 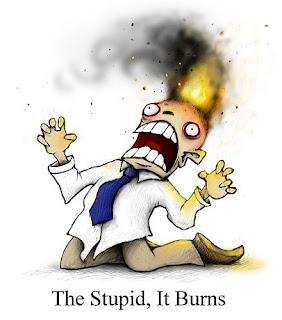 It turns out I was watching " Seven Signs of the Apocalypse", a show in which, according to the History Channel website "[e]xperts decode [the Book of Revelations] and come to a startling conclusion: there is now scientific evidence that many of these catastrophes could, in fact, be occurring." I watched it for quite a while, and I emphatically did not see any scientific evidence that the Book of Revelation is true. What I saw was a series of vignettes that followed a pretty regular pattern:
The History Channel is apparently not content to run a show about something as utterly freakin' fascinating as real (if remote) doomsday scenarios without tarting up the discussion with a thick coating of woo-woo. It actually makes me wonder if Phil Plait knew what the show was about when he was filming his segment (or if his segment was culled from another show somewhere), since he's absolutely not some kind of nonsense peddler and has, as recently as last week, railed against turning discussions of GRBs and super novas into "disaster porn".

Remember back when the History Channel actually ran shows about history rather than unapologetically peddling in hokum?
_____
1.) Paraphrased from my admittedly feeble memory.

Posted by Skippy the Skeptic at 5:08 PM