What's Christmas Without the Krampus?

This is the time of year when religious blogs around the internet light up with complaints about how culture has "taken Christ out of Christmas". Tons of complaints.1 I'm not really concerned about that, since I rather suspect that for most folks, even people who self-identify as Christians, Christmas is really about nostalgic tradition and love for one's family moreso than religion. That being said, I can certainly commiserate with folks who lament the crass commercialization of holiday sentiment and the replacement of long-lasting, cherished traditions with hokey corporate contrivances. (I'm looking at you, Olive the Other Reindeer.)

In that vein I'd like to call attention to an awesome holiday tradition that has been utterly abandoned here in the States, one that I would dearly love to see revived. Readers, I ask you...

Who took the Krampus out of Christmas? 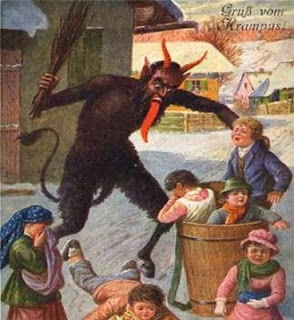 You'd better watch out, you'd better not cry...
The Krampus is a traditional companion of Santa Claus in certain parts of Europe, especially Austria and the surrounding region. Just as Santa brings gifts to the good children, the Krampus brings stone-cold whuppin's to the bad ones. Commonly pictured wielding a fistful of switches and carrying a huge basket in which to carry off all the really rotten kids, the Krampus is a fearsome figure who probably does a bit more to discourage naughtiness than the threat of St. Nick filling one's stockings with coal.

I really get a kick out of the Krampus. 2 I'm not a fan of threatening children with supernatural evil to encourage good behavior, but, unlike the earnest visions of hell propagated by religious folks, the Krampus is thought of as a rather tongue-in-cheek character.3 It's like telling someone that Frankenstein will get them if they're bad - it gets the message across, but it's not going to scar any little kids for life. Going one step further, folks in rural Austria actually dress up like the Krampus on the night of December 5th and parade around town making mischief and playfully "birching" passers-by. Halloween in December? That's something I can really get behind!
The Krampus is a weird, fascinating twist on the usual, saccharine sweet version of Christmas most people are familiar with...he's like the Grinch with balls. He's also a memorable exemplar of pre-Christian traditions being incorporated into the mythology of Christmas, a delightful byproduct of the social construction of this particular holiday. On a simpler note, the Krampus is just plain fun.

Come on people, isn't it time we put the Krampus back in Christmas?
______________
1.) In some ways the better question might be "who jammed Christ into everyone else's Solstice celebrations", but that's not especially relevant to my point.

2.) I like the Krampus even more because the Nazis took a distinctly anti-Krampus stance in World War II. A 1934 article from the New York Times (Available here...for $3.95) discusses how Nazis in Austria tried to stamp out the local Krampus traditions.

3.) Check out all the Krampus swag, both vintage and modern, on this site. Why in the world can't you get Krampus greeting cards stateside?
Posted by Skippy the Skeptic at 7:45 PM

My friends refers to her period-related pains as Krampus.