Animal Planet recently (and by that I mean in the last few months) started running a show called Monsters Inside Me which deals with human parasite infestations. It's a little bit light on the science side of things, but it's still pretty fun and it provides more than enough fodder to ruin lunch for my coworkers the next day. It's no Parasite Rex, but it's still worth a look if you have an hour of free time on Monday night.

My point? Well, other than the fact that it's fun to learn about nasty beasts like hookworks, threadworms, flukes, and cornea-eating amoebas, I think there's an extent to which the very existence of of these horrid little critters raises a theological question for religious folks. (Before I start I should say that I know this is reaching a bit and that I'm making it mostly facetiously, but it's still interesting to think about.) See, according to the three big monotheisms, everything was awesome at the beginning of the world: God created the world and it was perfect. There was no evil. (Some really odd creationists even claim that there was no death in God's perfect world and that predatory animals like sharks and tigers were herbivorous before the fall.) But, these creationists also claim that all of the creatures that exist today also existed at the beginning of time in more or less their present form.

So what does that mean?

It means that God created botflies to live in His perfect world. 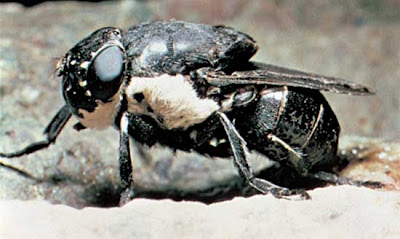 The Botfly: Proof of a malevolent God or just natural selection?
Consider how the botfly makes its living: It lays eggs in a host (or sometimes plants them on an intermediary which then infects a host) which then hatch into hideous, barbed larvae that proceed to pupate painfully inside the host before chewing their way out to fly off and repeat the whole disgusting process.** Botflies don't fit into any possible vision of a perfect world. They're nightmarish monsters that cause unimaginable pain and suffering in their hosts. I can't fathom how such a beast fits into an idyllic, God-created Eden with no evil or suffering. If Cthulhu was real and ruled the universe from the sunken city of R'lyeh then maybe I could conceive of a god that would consider botflies an integral part of a perfect world, but if I believed that an omnibenevolent Yahweh was in charge of the world I wouldn't have a handy explanation for the existence of botflies. It would be, as they say, a conundrum.

Luckily I don't believe in Cthulhu or Yahweh, so I do have a handy explanation for why botflies exist. See, while the botfly certainly doesn't fit into a scheme wherein a benevolent deity is running the universe with an eye towards everyone's best interests, it certainly fits into a competitive world wherein species are driven by selection pressures to strive for evermore effective ways to pass on one's genes by any means necessary. Imagine that: natural selection provides an explanation for a phenomenon on which the three majors religions are at best mute and at worst nonsensical.

___________________
* We're all familiar with anti-evolutionist groups among the Christians, there are also such factions in Islam . I suspect there are also fundamentalist Jewish folks that don't believe in evolution, but they don't seem to have much of a web presence.

** Here's a disgusting video of some botfly larvae being removed from a human host. I can't overstate how vomitous it is, so only watch it if you're really curious.
Posted by Skippy the Skeptic at 8:33 PM

Yeah, these things have also been known to get into people's eyes. Nasty little bastards.

I recently saw a video of someone squeezing about a dozen of the buggers out of his dog's snout, but that was just too gross to link to.

I'm glad I happened to be born in a part of the world that isn't populated by such horrifying monsters.

I always get a bit of a kick from filoviruses. Since they're viruses, they really don't do anything but make people sick, and they kill something like 90% of the people they infect. There's not even a shred of a case to be made that they were useful or benign "before the fall" or whatever, since their virulence is essentially a consequence of their physical configuration.

Death by hemorrhagic fever is much more ghastly than pulling a fly larva out of someone's back.