The Champion of Liberty

Mark Twain once said that irreverence is the champion of liberty, and with that in mind the Center for Inquiry has declared September 30th to be Blasphemy Day! It's a day to celebrate our right to question, disbelieve, and yes mock all manner of lunacy and snub our noses at the fundies out there who demand that we respect their beliefs or else. 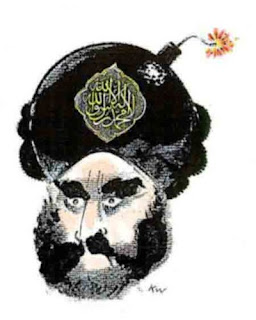 Blasphemy: It Does a Body Good.

September 30th, 2005 was the day that the Danish newspaper Jyllands-Posten published a series of cartoons (including the one above) depicting the prophet Muhammed in an unflattering light: A grave no-no for folks of the fundamentalist Islamic variety. The outcry from the fundies was both rancorous and hilarious as they vehemently maintained that their religious beliefs were somehow immune to any sort of criticism or satire. It's a sentiment often echoed by Christian loons here in the United States (albeit with fewer references to decapitation), as exemplified by our perpetually enraged friend Bill Donohue of the Catholic League.

Our power-mad buddy Bill somehow contrives that we nonbelievers only have rights because the religious folks graciously allow it. He's also been crying and whining because atheists don't make fun of the Muslims enough. Well Billy, I'll throw you a bone today. Posted above is a cartoon of the prophet Muhammed that was allegedly so blasphemous it was worth lopping people's heads off over it. Posted below is merely a scene from the uber-Catholic S&M flick The Passion of the Christ, set to the dulcet tones of a musical masterpiece written by Boots Randolph, a God-fearing fellow Kentuckian. Enjoy.

Posted by Skippy the Skeptic at 7:03 PM

For the creative atheist, every day is Blasphemy Day