Another UFO Up In Smoke...

I always get a weird feeling when the first thing I encounter on a visit to CNN.com is a headline about a UFO sighting. That was the case this morning when I was the checking news on my break at work and stumbled upon this video article. Apparently a lady named Deanna Smith and her family were visiting the King's Dominion amusement park in Virginia when they saw a large ring floating in the sky above them, which they then photographed. That's pretty par for the course as far as UFO sightings go, but then the story got...peculiar.

See, CNN interviewed two folks for this story: The lady who took the photo and a UFO investigator named Cameron Pack. Pack points to a similar UFO that was photographed near Fort Belvoir (also in Virginia) back in 1957 as evidence that this new photo might be something spooky. More on that later. Mrs. Smith, for her part, disagrees with Mr. Pack and thinks instead that maybe this smoke ring was a sign from God Almighty. It's not immediately clear what that sign is meant to indicate, but I think this lady may get extra credulity points for immediately jumping to divine intervention as her first explanation for a weird-looking cloud.

One thing that is immediately clear, however, is this: 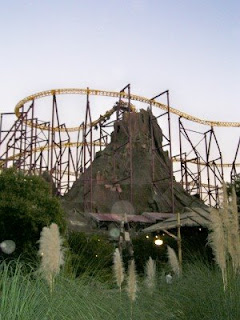 The towering monstrosity pictured above is Volcano, a roller coaster at King's Dominion that, among other things, is in the business of periodically launching gigantic rings of smoke into the air. I'm going to take a wild stab in the dark and posit that perhaps, just perhaps, the huge smoke ring in Mrs. Smith's photo might not have been produced by a vengeful deity but instead by the 155-foot tall smoke ring machine located nearby.

As for the 1957 Fort Belvoir photos, the incident was investigated by famous Condon Committee 50 years ago and was found to almost certainly be the result of an A-bomb simulation conducted at the Fort Belvoir military base. This simulation and others like it conducted at the base, according to a report from the Condon Committee, consisted of "[f]ive 55-gal. drums of gasoline, diesel fuel, TNT, and white phosphorus" that were arranged in a circle and then detonated. That certainly does seem like it could create a bit of a smoke ring. The report also noted signs that at least one of the photographs may have been retouched to make the smoke ring "appear more regular and more puzzling." The full report on the incident (as well as the full text of the entire Condon Report) can be viewed at the excellent website of the National Capital Area Skeptics.

Poof.
Posted by Skippy the Skeptic at 6:08 PM

Or Perhaps..it was something other than smoke

I think in the two cases I discussed we can pretty safely say that it was smoke. Heck, the author of the discussion that you linked to seems to not even be aware of the A-bomb experiment that was so central to the 1957 case.

I can't speak to the other cases she discusses, but I don't think I'm being unfair to say that, well, smoke rings happen sometimes. Hell, a few years ago a friend of mine built a "vortex gun" (which he named El Whampo Grande) out of an industrial-sized trash can. We used to light smoke bombs, fill the cavity of the vortex gun with smoke, and shoot humongous smoke rings out of the thing. The rings would hold their shape for far longer than you'd expect before breaking up into a cloud...which sounds pretty familiar, huh?

The fact that the clouds in the background are moving behind the ring and the details of those clouds are visible through the ring lends credibility to the smoke ring explanation.

When you've got something that looks like a smoke ring in close proximity to something designed to produce smoke rings, you're prudent to conclude that it was a smoke ring in the absence of really convincing evidence to the contrary.

I'd love to have compelling evidence to the contrary but after finding this youtube video of a man made smoke ring I think it is safe to say it is a large smoke ring. I too had no idea a smoke ring could stay intact so long after being made.