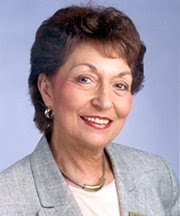 We've lost another one of the good guys. Judith Krug, longtime fixture of the American Library Association's Office of Intellectual Freedom and the Freedom to Read Foundation, died this past Saturday at the age of 69. Krug spent most of her adult life defending the First Amendment from the closed-minded and the easily offended.

If you've ever seen a sign in a library advertising "Banned Books Week" the you've seen some of Krug's work. She was a staunch opponent of censorship, especially as it pertained to the library system - Krug fought against the notion that books should be yanked from library shelves for being "offensive" and the idea that public libraries should use filtering software to block access to certain internet sites. Krug was never afraid of being unpopular or of supporting the free speech rights of unpopular segments of society. She even stood up to the government after the September 11th attacks to try and protect the confidentiality of library usage records.

Most folks have probably never even heard of Judith Krug, but her dedication to free speech certainly makes her worth remembering. She'll be sorely missed.
Posted by Skippy the Skeptic at 9:06 PM