I saw over on Pharyngula today that my pal Ray Comfort and uber-Catholic venom machine Bill Donohue are currently locked in a brutal slap-fight about evolution. Since Ray is arguing for instantaneous special creation* and Bill is arguing for God-driven theistic evolution combined with the special ensoulment of humans, both of them are wrong, but it's still kind of an interesting match-up to watch. 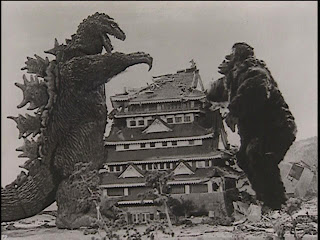 I can see the resemblance, but it just isn't the same.
Actually, while I'm loathe those to type these words, I think Ray is actually right here. He's correct to note that the Bible is a purely creationist book, and that Donohue is trying to revise its meaning to fit in with findings of modern science and is therefore undermining the point of his own holy book. Unfortunately for Ray, stubbornly clinging to a literalist interpretation of the antiquated doctrines of of the ancient Hebrews doesn't make him any more correct about reality itself than Billy. It just makes him wrong in a slightly more philosophically honest way. Bill is trying to slyly modify his doctrines to fall in line with reality, all the while trying to pretend that his religion was correct all along. Ray, on the other hand, is content to fiercely insist that his religion is correct as-is without any need to dilly-dally with such buzzkillers as observable reality and the totality of geology, astronomy, biology, and genetics. Each one is still wrong, but Ray is closer to being correct about what his religion actually claims than Bill, while Bill is a baby step closer to being right about biological reality, despite having to be intellectually dishonest about what his own Holy Book says to arrive at that position.

Alas, I'm afraid that they're pretty unlikely to engage in a brutal death-struggle on top of Mt. Fuji before being plunged into the Pacific Ocean by a sudden earthquake.

*At least as far as I can tell. Ray usually doesn't pin himself down by taking positions that are more specific than "atheists/evolution/Catholicism/paintings of boobs are bad."
Posted by Skippy the Skeptic at 3:35 PM