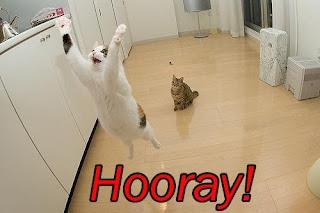 Obama Wins!
MSNBC and CNN are both projecting that Barack Obama has now amassed 287 electoral votes, making him the next president of the United States. I braved a record turnout here in suburban Louisville, waiting in line for almost...a minute or two to vote in this historic election (To be fair I voted kind of late - My friends that voted this morning reported legitmately large crowds.) and I really have had butterflies in my stomach all evening. I know Obama was projected to win, but I got shocked by Kerry's defeat in 2004 so I've actually not unclenched my butt since I woke up this morning.

The United States has a black president elect. Times have changed a lot since the relatively recent past, and maybe now we can start to turn the page on the disastrous policies of the last 8 years. Now keep in mind that I don't think Obama is some kind of Superman, nor do I think of McCain as some kind of monster, but...wow.