Update: I've added an embedded picture of the "carcass" below the rest of the post because Cryptomundo and some of the other cryptozoology sites are getting so much traffic that they're crashing left and right.

I just finished watching that Yang Huei guy kick everyone else's ass in the men's all-round gymnastics competition, and I have to say that the last thing I expected to see upon hopping online to check the other Olympics results was this. Apparently a group of Sasquatch hunters claim to have a Bigfoot carcass, which they further claim to have just found out in the Georgia woods. The two men involved, policeman Matthew Whitton and one-time corrections officer Rick Dyer, are being backed up by Tom Biscardi, the guy out in California who runs Searching for Bigfoot, Inc. They'll be holding a press conference on Friday during which they say they'll produce the carcass and "DNA evidence" that will prove that it's a Sasquatch. (Biscardi is apparently a big name in Sasquatch hunting, at least according to the 3rd-person accolades about him on his website, but he's apparently not quite big enough to have his own Wikipedia page.)

Dyer and Whitton claim to have found the body several weeks ago after sighting numerous other Sasquatches milling about in the general area. Luckily they had a Sasquatch-sized ice chest (a deep freezer, I guess) at their disposal, and they've been keeping the carcass buried in ice ever since. It is perhaps worth noting that Whitton and Dyer also happen to own a company that sells Bigfoot expeditions, and further that they have announced plans to go capture one of the other Sasquatches alive, since they know where they all hang out now. That should be good.

Cyrptomundo.com has a bigger pic than the images on Searching for Bigfoot, but the site has been flooded with traffic and thus may be down at any given time. The picture is also available here. Honestly I'm not especially impressed with the picture and somehow I suspect that the "carcass" will not be made available for study, but I guess there'll be more to talk about on Friday. Two things of note - The first picture on Biscardi's site shows the body completely buried in ice, while the picture from Cryptomundo (a fancier version also released by Biscardi) shows the animal not only uncovered ("thawed") but completely dry, which seems a little off. Note that the fur is even dry enough to be wispy and sticking up. Secondly, that fur looks an awful lot to me like the fur on a gorilla costume, and I say that with some authority because I own a rather expensive one. Costume fur gets kind of a weird, bed-head sort of look that doesn't actually resemble ape hair all that much. My prediction is that this is either a stuffed costume or some combination of regular animal remains mixed with a healthy dose of contrivance. In any event, I think Friday should be pretty interesting, if not for the reasons Biscardi intends.

Oh, and Loren Coleman over at Cryptomundo, who penned the article I linked to above, has also pointed out this. Looks a little...familiar... 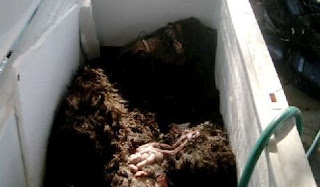 This is a picture of the supposed carcass. I believe that Tom Biscardi holds the copyright to it, but I've provided it here as a service for the curious.
Posted by Skippy the Skeptic at 1:26 AM

Time to get the tinfoil hat out of storage, Skippy!

The press conference yesterday was a freakin' joke. Their big unveiling was just the same picture that's on the bottom of my post and all over all the cryptozoology pages. Right now I think the only question is whether Biscardi's in on this or whether the other two guys are playing him for a sap. At this point I'd say there's about a 50/50 chance of either.