Word from the Vatican is that it's cool to believe in aliens. Rev. Jose Gabriel Funes, who's the director of the Vatican Observatory, recently noted that believe in his wacky sky deity is does not preclude the existence of life on other planets and that Catholics can believe in aliens without the threat of everlasting torment in hell. He said that aliens would all be "God's creatures" too. Funes said that ruling out the existence of aliens would be equivalent to "putting limits" on God. 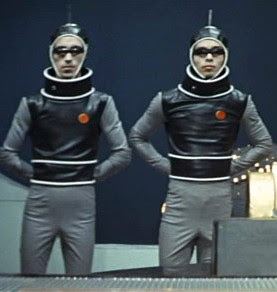 And on the eight day, God created Spacemen.

Now, it's fair enough to say that their might be aliens out there. Heck, I'm no UFO True Believer™, but as far as some form of life existing somewhere in the universe, the statistics seem to favor it. That being said, it's just hilarious to me watching the Church flail around reaching for some sort of modern context for itself. I'm waiting for a papal pronouncement about Sasquatch next.
Posted by Skippy the Skeptic at 8:56 AM

One must wonder if each of these putative other worlds are supposed to have had their own colloquial Jesii, or that there is some subset of created intelligent beings, to which humans belong, that disobeyed God early on and so needed to be saved.

Can other races drop the ball now?

Thats it! A band must be formed, and we shall call it "colloquial Jesii". I am the bass player.
The pope should promptly proclaim himself "intergalactic pontiff".
Tang will now be offered instead of wine.

Actually, "Colloquial Jesii" would make a good name for a band...

The issue of intelligent life on other worlds has always seemed (to me, anyway) to have significant ramifications for most religions, since they usually have as a presupposition the "specialness" of humankind.

On the other hand, the Scientologists have been going on about aliens for decades...

Yeah, Jak, I agree- the discovery of other intelligent life would hit religions pretty hard.

Why did you put "specialness" in quotes?

You know, I saw a history channel show on time travel, and they mention that when a time machine is created, (in theory), it can only take something as far back as the moment of the creation of the machine. A far advanced alien culture that had created said machine thousands of years ago befriends us and lets us use the machine and we go back to Judea c. 30-33CE...
Another idea I like is to write a story about a scientist who creates a time machine and he knows it works- because the moment he turns it on, messages start appearing- a few of them are test messages, he is elated! But then start coming the messages dated far into the future- and it isn't good news- Skippy is elected president and has everyone praying to his girlfriends cat. Or if that idea won't sell, we'll go with a doomsday scenario of some type.

The Space Pope, a rabbi and a Bolivian midget walk into a bar....

I put "specialness" in quotes merely because I was too lazy to type the HTML tags to italicize it, but I think you got the point I was trying to make.